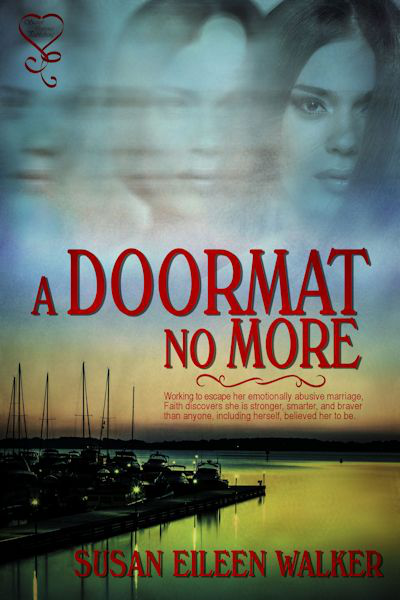 Once upon a time, she loved him and thought he felt the same. But their marriage changed everything between them. Nowadays, as long as she does everything he wants, when he wants, and how he wants it done, there is peace in the house and things were fine between them. Only they weren’t, and it was all her fault. It was always all her fault.
Then came the day she decided things had to change. That was the day she began a journey. The journey to break free from the abuse that had transformed her from a smart, funny, independent woman into a human doormat he used as his verbal kicking post. Along the way, she rediscovered herself, her strong, smart, brave self that somehow had gotten lost along the way.
And along the way, she found her joy again.
*Based on true stories*

Susan Eileen Walker was born in Maryland, a state her family never lived in. At the age of five, she fell in love with books and decided she would join those who created such magic.
Susan currently lives in eastern North Carolina with her sixty-five pound mixed breed furbaby, Honey, who is a combination protector, personal trainer, and alarm clock.

“What does your husband have to say about you becoming an enforcement agent?” Cody asked the next morning after she opened the office. He tossed aside the paper he had been reading while she went through her morning routine. She glanced down and saw that he had been reading her list of questions.
She tried to maintain eye contact with him, but had to glance away time and again to look over his shoulder, out the window, anywhere but in those piercing eyes. He saw too much when she met his gaze. She swallowed hard and dropped her gaze to her hands. The two gold bands on her left ring finger were nicked and scratched. The one-third carat diamond winked at her as if it knew a secret.
Raising her head she straightened her shoulders. She forced herself to meet his inquisitive gaze. “He doesn’t know I’m thinking about it.”
“Don’t you think you should talk to him?” Cody asked. He sounded surprised that she kept such a decision to herself.
“Why? It’s none of his business,” she said, sounding bitter even to herself. She fought the urge to duck under her desk.
Cody’s gaze sharpened. His eyes narrowed for few seconds while he studied her. Then he relaxed and picked up his travel mug. “Does he hit you? Hurt you? Beat on you?”
“No,” she said, dropping her gaze again. Her fingers were knotted together on top of the desk. “He’s never raised a hand to me. He’s never had to. His words do enough damage.” She jumped when a tear landed on her fingers, wet and burning hot. Talking about the failing relationship added to the pain instead of detracting from it.
“You should leave him if he hurts you, even if he only uses words,” Cody said, his deep voice gentler than she ever heard before.
“I plan to. But it takes money to start over. Apartments, divorces and just plain living cost money,” she pointed out, wiping away her tears with shaking fingers. “He doesn’t know I’m working. I hope to save my paychecks for a few months until I have enough to leave,” she said, outlining her goal.
“Problem is, I’ll probably need a second job once I’m on my own. I thought you could train me to be a bail enforcement agent. That way I’ll be able to support myself once I leave Matthew by working here and doing bail enforcement as well.”
She glanced up when Cody stood. His expression chilled her to the bone. He turned and stalked from the room. She stood to follow until she heard a string of inventive curses, which stopped her in her tracks. She stopped halfway across the room. Her shoulders drew up as if she were a turtle pulling into its shell. Her arms wrapped around her middle to protect herself and then the shaking began.
Cody was mad and it was her fault.
What would he do? Would he call Matthew and share her secret? Or hunt him down and hold a “come to Jesus” meeting about how to treat a woman?
She found herself barely breathing as she waited for Cody to calm down. Would he fire her? Or just yell at her for being stupid? When the back door slammed and glass shattered, she jumped. She rushed into the hall that ran down the center of the house. Cody was standing outside the back door looking at her through the hole where glass had been just moments before.
She froze mid step, waiting for a second explosion. In her experience men who did something as destructive as shattering a window never dealt well with the aftermath. Before she could apologize his lips stretched into a wide grin and then he began to chuckle.
She stared at him, afraid to move. Matthew often smiled too, just before attacking her with a verbal backhand. When she got upset at his words, he would take offense. “I was only teasing,” he’d say.
“You really need to learn how to take a joke.”
But his insults were not jokes. They were degrading, belittling, cutting comments. With each slap, each insult, she faded, eventually becoming the human doormat Matthew walked upon on a regular basis.
“Are you all right?” she asked in a small voice. She braced herself for anger.
“I’m fine, but JJ was right. That old door didn’t survive my temper. Could you wake him up and tell him to go buy a new door? I’ll clean the glass up later.”
She nodded. As he turned away, she called, “I’m sorry.”
Cody paused, then turned back to face her. He looked serious, somber, but not angry. “Why are you sorry? I broke the glass,” he said.