Beyond the Cut by Sarah Castille

Dawn thought she finally got out of the MC life.  Her ex set her up and her twins were taken from her.  Now she is  being blackmailed by her ex sister-in-law to get more time with her daughters.  Now she works three jobs just to see her daughters as much as she can until she can get them back.

After a couple of hot nights with Dawn,  Cade cannot get Dawn out of his head.  When her ex puts her and her daughters life in danger, he has to protect her.  He never thought he would get an old lady, but with Dawn, anything is possible.

Cade is the badass with the heart of Gold for the right woman I love in books.  He will rip off  the arm of any man that looks at her wrong and shove it down that person’s throat.  How awsome is that! 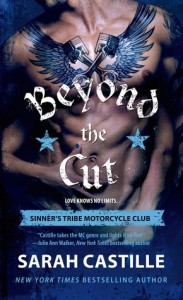 As a teen, Dawn Delgado ran from a life on the streets straight into the arms of Jimmy “Mad Dog” Sanchez, a biker who promised to be her knight in shining armor. But his love was just another cage. Ten years later, Dawn is determined to start over again—and be the kind of woman, and mother, she was meant to be. Could it be that Cade “Ryder” O’Connor, a member of a rival club, is the answer to her prayers?

Will He Give Her the Ride of Her Life?

A loyal member of the Sinner’s Tribe, gritty outlaw Cade is another hard-living, hard-riding biker who’s willing to sacrifice everything that defines him—because that’s what losing the cut means. Dawn can’t deny the full-speed attraction that blazes between them, or the safety she feels in his leather-clad embrace. But will Cade’s love lead her down the road to her dreams? Or will she arrive at yet another dead end?

Thanks very much for hosting and for the awesome review!