Like I said before, this series is more like a screen play than a book. I know there is a crusade to make this series into a television show on a cable channel. I really think that is possible if the right people catch a whiff of it.

This season of BOYSTOWN, we continue the stories of friends and lovers in Chicago. Love, deceit, tragedy, comedy, and intrigue. All the wonderful components to make any soap opera a hit. Like any soap, there are story lines I love and can’t get enough of, and some that I can’t wait until they resolve so that I can stop hearing about them. If you are a soap addict, read this series!!!!!! 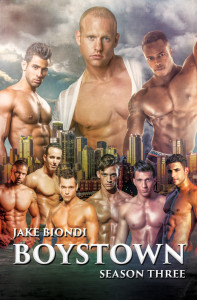 It’s a race against time to save those caught in the New Year’s Eve explosion.  The survivors may not be the lucky ones as they struggle to restore normalcy to their lives.  As the smoke clears, families are torn apart and lives are permanently altered.

Even more dangerous than the bomb, the Mancini-Ciancio feud heats up as family members fight for control and survival.  At the same time, Jesse Morgan faces the fallout from his plan to break up his mother and her husband, Keith Colgan works to keep his past from destroying his future, Rachel Carson begins a plan that may have deadly consequences, and the search for the fourth Mancini brother reveals secrets that threaten to tear relationships apart forever.

It all culminates in a fabulous fundraiser like none that anyone in Boystown has ever experienced.

Growing up in the suburbs of Chicago, Jake Biondi fell in love with “The Windy City” at an early age. He left the Chicago area for four years to attend the University of Notre Dame, from which he graduated with degrees in English and Business. He was awarded the university’s prestigious William Mitchell Award for Playwriting. Upon graduating from Notre Dame, Biondi returned to Chicago where he attended and graduated from the Loyola University Chicago School of Law. He has been living in Chicago’s Boystown neighborhood for over 20 years.

While studying literature, Biondi became a huge fan of Charles Dickens whose novels were originally released in installments, each ending in a cliffhanger to keep readers coming back for more. Because of his love of those novels as well as television dramas such as Dynasty, Knots Landing, Dallas, and Revenge, Jake Biondi decided to create a serialized saga for contemporary audiences. Thus, the BOYSTOWN series was born.

Biondi began BOYSTOWN in June of 2013 as an online story and intended to release one “episode” online per month, each ending in a cliffhanger. The story became so popular — and the online reading audience grew so quickly — that people from all over the country began to email him demanding to know what happened to their favorite characters and wanting the episodes to be released faster. They also had suggestions for future storylines. Excited by and grateful for his readers’ responses to BOYSTOWN, Biondi began to write and release installments more quickly.

Because of the popularity of the book series, fans have suggested that BOYSTOWN be turned into a television series. Biondi recently completed the TV scripts for the first season of BOYSTOWN and hopes to bring the series to television in the very near future.

« Beyond the Cut by Sarah Castille Wild Pitch by Sloan Johnson »