Before I do anything else, I wanted to help promote a great author, Ms. Jana Downs.  On the right side of my blog you can find a link to her blog.  She has a new release:  Saved by Surrender 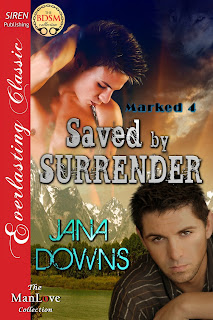 Here is the synopsis of Saved by Surrender:
Regan Adamson has a secret. As beta for the blackfoot pack, the only thing required of him is acting like a Dominant male. In the world of pack, switching is not an option but when he meets the omega,
Titus, his resolve to ignore his need for occasional submission is put to the test.

Titus Oswin is on a mission to rescue a kidnapped group of humans. He never expected to meet his mate in the process. An admitted switch, Titus refused in the past to accept a lover who doesn’t Dominate and submit. But Regan is so deep in the submissive closet that Titus isn’t even sure the instant attraction and growing respect between them is enough for him to take a chance on their relationship.

As troubles within and without the pack arise, Regan will have to decide if being with Titus will be his ultimate downfall or if he will be saved by his surrender.

Before I go on to my review newest review, one thing you need to know about me is that when I am into a really story, it plays out in my head like a movie.  A great author will give me enough of the setting to help me around picture everything while still letting me picture certain things on my own.  If an author can make go through every emotion there is in one story, then that is a great author.
One such great author is Jaci Burton.  This weekend I was re-readi Jaci’s Play-By-Play Series in celebration of her newest release in this series, One Sweet Ride.  Reading the series in order was like renting all the movies on DVD and watching them in one day.  Ok, granted it took me 3 days to read 6 books, but you get my drift.
One Sweet Ride Book Six in the Play-by-Play Series

To get what you want you have to move fast.

Gray Preston was born into money, but he’s built his racing empire on hard work and muscle. Now, with millions of fans, his senator father sends one of his aides, Evelyn Hill, to elicit Gray’s help in garnering votes for his upcoming national election. Gray wants nothing to do with his estranged father’s campaign, but Evelyn can be pretty persuasive. She’s willing to learn about racing, and maybe even get a little dirty.

Evelyn’s number-one goal is politics, which makes working with Gray difficult, because his only passion is fast cars. As she and Gray spend time together, he teaches her about the sport he loves, and she learns a lot about the man behind the wheel. The more she learns, the more she wants him. But any desire that threatens to derail the carefully laid plans for her future is a dangerous one.
With the passion Gray and Evelyn share running hotter than either imagined, one of them is going to have to compromise, or run the risk of losing more than their hearts.
Jaci Burton did a great job with this book!  I hated Senator Preston with a passion for what he did to Gray.  Without giving the ending away, I felt every emotion Gray felt from the beginning of the book, to the end.  Evelyn is a good match for Gray and I love how she didn’t give up on her dreams.
My son is a huge NASCAR fan so reading this book made me smile, because I watch almost every  race with him and I knew all the terminology.   That being said, I give One Sweet Ride and the entire Play-By-Play Series ❤❤❤❤❤.
On a personal note, I am a Weight Watcher.  I have been for almost 6 years.  But it wasn’t until this year that everything has clicked for me.  As of today’s weigh-in (-2.5), I have lost 22 pounds and I have achieved something I thought I never would.  I earned my 10% Key Chain!!!!  If you don’t know what that means, it means that I have lost 10% of the original body weight from the date that I started Weight Watchers.  I am actually proud of myself for that.
Ok I guess this entry is long enough for today.  Ciao.
Karen
📂This entry was posted in Uncategorized

Congrats on your weightloss achievement!

Thank you for your comments and Congrats!

Congrats on the weight loss!!