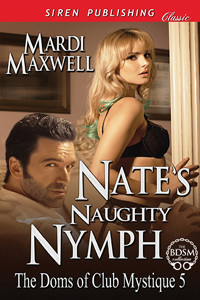 Nate McLeod does everything in his power to keep his sons alive even if it means letting them believe he’s dead. While they’re safe with his cousin, Jake Ramsey, he goes after the man who tried to kill him and harm them. Focused on his mission he doesn’t have time for relationships until DEA agent Nymph Lachlan walks back into his life.

Free-spirited Nymph believes in going after what she wants and that means Nate. When she tells him she’s not interested in marriage then offers him a D/s relationship it’s a proposal he can’t refuse. She’ll submit in the bedroom but be his equal partner in their pursuit of Mendez’ drug cartel.

When their mission leads them to Rendezvous, Texas, Nate is forced to reveal his identity to his sons. Now he and Nymph have two battles on their hands—stop Mendez and get the Ramsey brothers to let him be a part of their lives.

This is the book where we find out the backstory and blanks are filled in when it comes to our favorite doms.  Nate and Nymph were meant to be together.  Not only did they fall hard for each other but they compliment each other like chocolate  and strawberries.  In the bedroom, they burn up the sheets or whatever surface they are using and in the field they are totally badass.

I don’t think I could stay away from my boys the way Nate did.  He is a selfless man.  And Nymph is just da bomb.  I would love her as a step mom.

The hospital sex was hot!!!

« Broken by Cynthia Eden Shaken Not Stirred by Sawyer Bennett »