My Treats to you: Midnight, New Orleans Style & Seducing Chaos

SiKReviews 3 Comments
Happy Halloween!!!!!  I know, I know it is almost over, but, if you don’t know already, I have been sick.  I have asthmatic bronchitis and I haven’t had the right cocktail of drugs in my body, until hopefully today!  With all the time on my hands, I figured I would take the opportunity to just lay around and read.  Ok, so I do that more times than not anyway, but I got to read and not be yelled at for not folding laundry or cleaning the house because I am attached to my Kindle.
Today I thought I would give you my two picks for this year’s Halloween Picks!  Yes it is my first, but I couldn’t help myself.
So, my first treat for you is this. What do you get when you cross 5 college friends, vampires, demons, ghosts, witches, and shifters?  Why the Midnight, New Orleans Style Series of course! 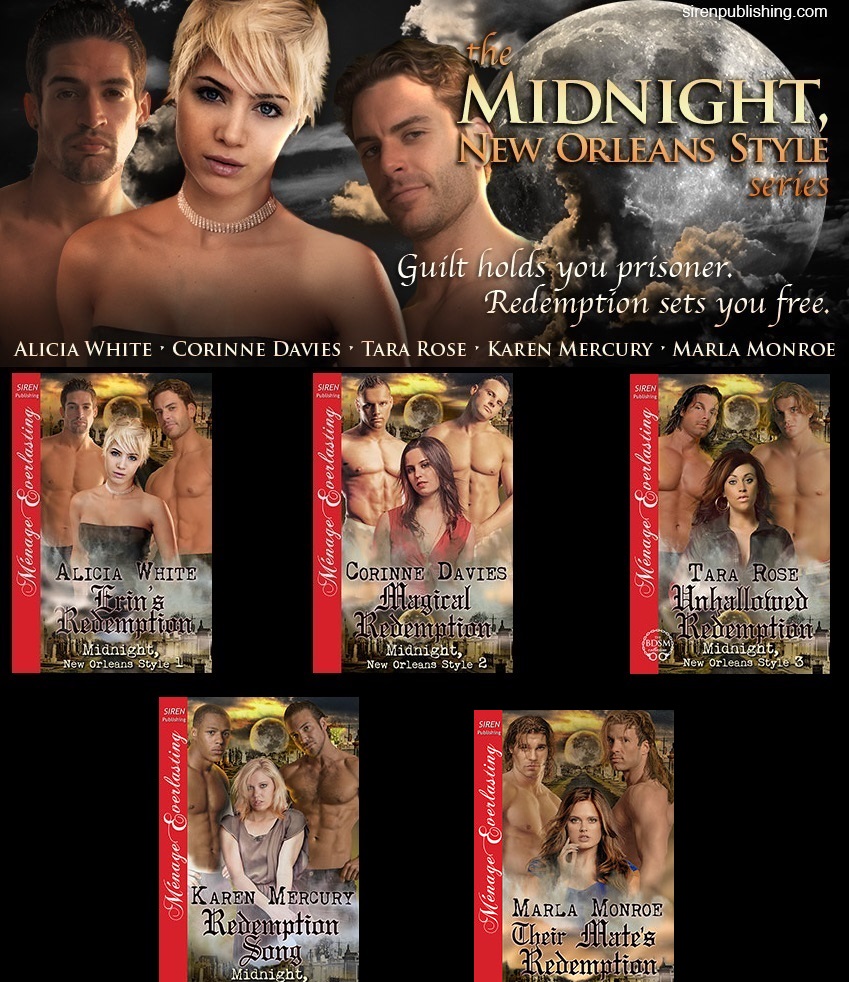 These five books are written by some of Siren Publisher’s most esteemed and well know writers: Alicia White, Corinne Davies, Tara Rose, Karen Mercury, and Marla Monroe.  I can’t tell you how many books I have just from these awsome ladies alone, because I am pretty sure it is most of each of their own backlist.
When I first got wind of  this series, I was really excited.  I had made up my mind that I would not read the series until all of the books were out so that I could just plow through them.  With me being sick, it worked out perfectly.
Midnight Redemption, New Orleans style is about 5 college friends who decided to go to New Orleans for Halloween as a tribute to their friend, Lissette, who unfortunately was murdered.  Each have their own reasons for wanting to pay homage to Lissette.  That night they get an  idea to go the cemetery and visit the tomb of Marie Laveau, the Voodoo Queen of New Orleans, to make wishes.  What they find at the cemetery is what it makes this, Midnight, New Orleans Style!
Book 1 is Erin’s Story (Alicia White) – Erin Holmes is dying. She empties her account and heads to New Orleans. Her plan: one last party before saying good-bye to her friends. After meeting her old college buddies at their hotel, they have a few drinks and take a trip to a cemetery.
Mikael Moreau is a vampire. Inside the cemetery, he smells his Eternal Love—a vampire’s perfect match. Abandoning a territory battle, he spots an unconscious woman. He carries her back to the coven, hoping he can save her life.
Elijah Moreau is angry when he learns that his brother went into battle without him. When he goes to confront the other man, the smell of death hangs in the air. He soon finds out that the woman lying on the bed is Mikael’s Eternal Love. To save Erin, both men must donate their blood to empty hers of disease, which means that Mikael will need to share his Eternal Love with his brother. The three form a blood bond, but is it enough to last an eternity?
Book 2 is Dani’s Story (Corinne Davies): Dani O’Brien is an introverted astrophysicist who spends most of her life staring at the stars and never allowed other people’s opinions to dictate her life. Her four best friends are the closest she has to sisters and their annual gathering to celebrate a friend’s life is one of the highlights of her year.
Identical twins Gavin and Maddoc McDryw are Druids with the ability to influence the energy that every living being emits. They alienated themselves from their clan after allowing a woman they thought they loved to manipulate them. The brothers can’t figure out why they are so drawn to the quirky human but the longer she’s with them the stronger their feelings for her become. But, not everyone is happy with this burgeoning relationship. As negative forces tear them apart, can they trust in the magic of love to hold them together?
Book 3 is Faina’s Story (Tara Rose):  When Faina Andropov visits New Orleans with four college friends, it’s to honor the death of their friend, Lisette. The five have never resolved the guilt they feel over Lisette’s death, and decide to make a wish at Marie Laveau’s tomb on Halloween.
Faina and her friends become separated, and she is kidnapped by demon brothers Alexei and Konstantin Veselov and held prisoner in their mansion. As she becomes their lover, she learns that Alexei and Konstantin are bound by a contract with the devil, and she is both their key to freedom, and the love they must sacrifice to become human again.
With the help of a fallen angel, the brothers find a way out of the contract. But before they can execute it, Faina is attacked by their enemies. Can they rescue her in time, or will they be forced to make the ultimate choice?
Book 4 is Heidi’s Story (Karen Mercury):  Halloween in New Orleans. Rémy Lafitte has paid a charlatan to enact a Voodoo ceremony in the cemetery. The ritual reanimates Niko Valdés, a French Quarter tutor who was damned to Everlost for murdering his sister’s attacker.
Mild-mannered stockbroker Heidi Purdue stumbles upon Niko and Rémy in a compromising position. They are interrupted by a demon on horseback who beheads the charlatan before giving the trio a pentalpha puzzle to solve.
Curvy Heidi knows that heartthrob Rémy would never fall for her, but she falls for the undead tutor. Rémy, jealous of the other two’s closeness, agrees to an equitable ménage, opening up to a male lover.
The centuries-long battle against primordial evil leads them to a temple, where they find Solomon’s ring. They go past the portal of Hellmouth to redeem themselves, but the real puzzle is how to fulfill the prophecy that they are intertwined inexorably—now and forever.
Book 5 is Shayla’s Story (Marla Monroe):  Struggling with guilt, Shayla learns that true love can set you free, but it sometimes comes with a price. Gaston and Beau learn that claiming their mate might cost them their pride.
Beau and Gaston struggle to protect their mate while trying to understand what is happening with their enemies. When it becomes obvious that demons are behind their latest trouble, they know that the trouble wasn’t from within the pride, but from outside.

I found this entire series to be intriguing and I couldn’t put them down.  Each author took a woman and told her story but yet found a perfect cohesion.  To say I had a favorite one would be like telling people who your favorite child is, so I won’t.  I will say that I couldn’t find a better read than this series on Halloween or anytime for that matter.

This series get 5 hearts, one each for the Authors who have stolen mine in more ways than one. 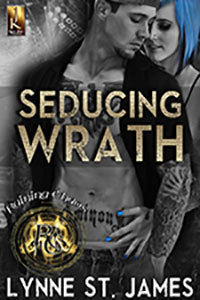 They say the road to hell is paved with good intentions… I had them, the good intentions, when I answered the ad to write an article about Raining Chaos—the band I loved—and make use of my newly printed diploma hanging on the wall. Okay, it was more than that. It was also Wrath. Lust at first sight? Oh yeah, and so much more.

I’m going to be totally screwed when he finds out the truth. ‘Cause you know nothing goes as planned and I screwed up big time. Like I said…road, hell, good intentions…I’ve got that.

Blue hair? Oh yeah, the chick has my attention, she got it as soon as I saw her. Only thing, I never expected to get addicted to her. Even if there is something about Sapphire that doesn’t seem right to me, I can’t seem to keep my hands off her long enough to give a crap.

At least I didn’t until I got kicked in the gut when private info was tweeted to the world. It’s hard enough being on our first tour without someone working against us. I don’t want to believe it’s her, but…

Join me, the guitar player, and Sapphire, the groupie as Raining Chaos continues our tour. Our hearts catch fire, but the truth may rip us apart.

I can’t tell you how much I really loved this book.  There is nothing like a bad ass rocker that falls as hard as he rocks.  Blue was what every non-popular girl in high school feels at some point, invisible.  Wrath and his “brothers and sisters” made themselves from nothing.  Most in their situation would turn to drugs and despair.  With awsome foster parents, they are now living their dream.

It is only when Wrath thinks he has truly lost the love of his life and you think you can’t love him anymore, that he does the one thing that can only make me love him more….   He called the only person he ever thought of as MOM!  Big, bad rocker showing his soft side……my insides melt, and yes, Lynn, I cried.

I can tell you will have me balling my eyes out if not the next book, then the one behind it, for more than one reason.

With so many emotions and expectations, I can only give this story 5 Hearts!

Thank you, Karen! I sure hope you start feeling better finally! <3 I <3 you too!

Thanks so much for the shout-out, Karen!

Thank you so much for featuring our Midnight, New Orleans Style series! <3