I could really relate to Keely for I was a “late” bloomer too.  Everyone thought of me as the sister.  Took me years to find someone who thought of me as a  woman.  I felt bad for her that she was doing something that was expected of her and not what her real passion was.  Jonah is the ultimate hometown hottie that had to see Keely what she was now, not what she was then.  If someone were to be my rescuer, please make him as hot as he.

I really good story about coming home and going for your heart’s passion.

What do you get when you cross a brainy geophysicist and a former army helicopter pilot? Chemistry that smolders like a volcano. Keely Anderson and Jonah Clark reconnect in their hometown of Marietta, and the longtime friends find it impossible to fight their attraction for each other. Read on for a peek into Jeannie Moon’s exciting new contemporary romance, Daring the Pilot! 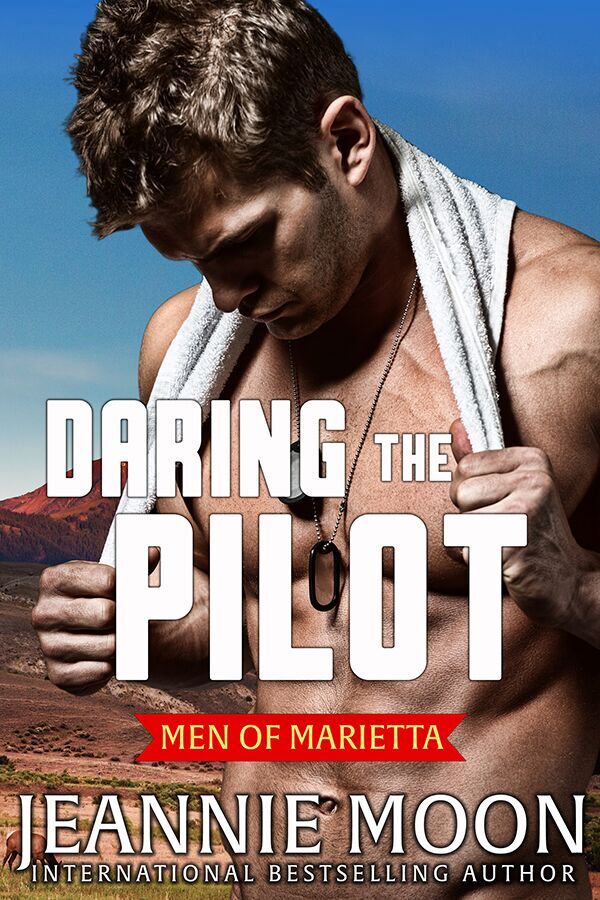 Keely Andersen hasn’t visited her hometown more than a handful of times in the last ten years, but when her doctoral research sends her back to Marietta for the immediate future, she can’t wait to reconnect with the community and the mountains she missed so much. Of course, nothing goes as planned, and Keely’s truck breaks down a few miles outside of town. When help arrives, she finds herself face to face with her brother’s best friend – the guy she used to call big, bad and gorgeous – Jonah Clark.

Still settling back into Marietta after a harrowing stint as an army helicopter pilot, Jonah Clark plans to spend a few days hiking the local mountains to prepare for his job as a pilot for Crawford County’s Search and Rescue team. When he stops to help a stranded driver, Jonah is shocked to find his best friend’s younger sister is the one behind the wheel. Only now, instead of the geeky teen he remembered, Keely is all grown up with curves he can’t resist.

Though the sparks of attraction ignite immediately, the pair is hesitant to act because of their shared past. But when a project dear to their hearts is threatened, and a child is lost on Copper Mountain, Keely and Jonah drop everything to fight for what matters, including each other.

Spread the news about DARING THE PILOT with a GIVEAWAY!

One winner will receive a $25 Amazon Gift Card! 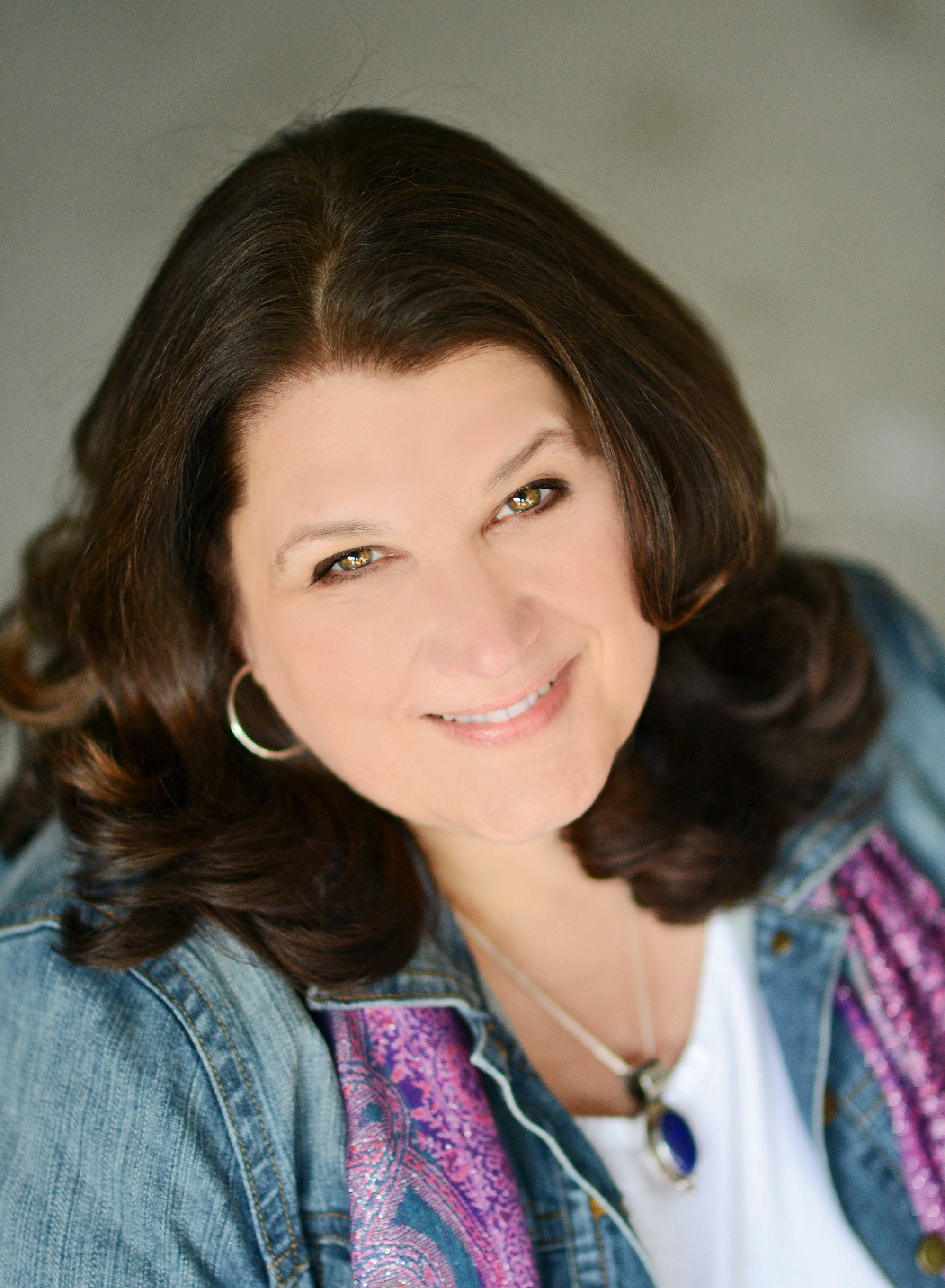 Bestselling contemporary romance author Jeannie Moon, has always been a romantic. When she’s not spinning tales of her own, Jeannie works as a school librarian, thankful she has a job that allows her to immerse herself in books and call it work. Married to her high school sweetheart, she has three kids, three lovable dogs and resides on Long Island, NY. If she’s more than ten miles away from salt water for any longer than a week, she gets twitchy.

Visit all participating blogs for more chances to WIN!

April 5, 2017
Hike2Forty and beyond
Splashes Into Books
For Love of Books4
Naughty Book Eden

I love this series!!!  Fighting Attraction is a perfect addition.  Who doesn’t have a dark side?  I mean would I want what Penny did to the extent that she did, no, but in my dreams?  Hell Ya!!!!  I am all for a story female character be herself with the man that owns her heart.

I will say it again, I love this series.  And I absolutely  love how different the relationship Penny and Jack has compared to the other characters, but what was not different was the depth of their love.

Four sexy MMA fighters who will fight hard to win their women. Fans of Real, Beautiful Disaster, Worth the Fight, and Fifty Shades of Grey will love this standalone addition to the Redemption series by New York Times Bestselling author Sarah Castille. 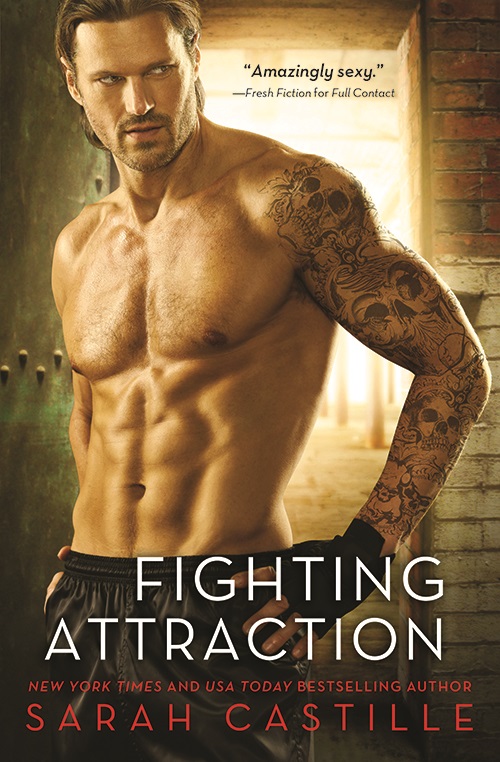 My sweet, sexy Penny has a dark side. Just like me.
I will have her. And then I will lose her, and suffer a lifetime of regret.

Rampage. Everyone loves him. He is Redemption’s top heavyweight fighter and the biggest gossip in the gym. But he isn’t the teddy bear everyone thinks he is. He’s hiding a dark secret-and he hates himself for it.

Twice a week, Rampage transforms into Master Jack, a notorious dom only the most hard-core submissives will play with. How can he-a Southern gentleman, bred to respect and protect women-want to dominate them?

But Penny Worthington wants him. Beneath her pearls, kitten heels, and prim British exterior beats a tortured heart…Master Jack is the only one who can set her free.

Other Books in the Redempton Series

“You’re so fucking soft,” he breathes. “So sweet.” He presses a kiss to my neck as his hands move over my body. I wrap my arms around his neck, pull him down for more. I want his full weight on top of me. I want to feel crushed, smothered, enveloped in hot, musky male.
Jack groans. His hips press into my stomach, his erection a delicious friction between my thighs. I part my legs wider, grind against him, seeking the delicious sensation of rough denim on my throbbing clit.
“Shh. Slow down. I want to enjoy you.” He trails kisses down my neck, over my throat. Shifting to the side, he cups and squeezes my breasts through my bra, his touch solid and strong. I writhe and wriggle, unable to stay still. He is driving me crazy with his touches, making me so wet it’s all I can do not to rip off his clothes and make him give me what I want.
His eyes darken, and he shoves my shirt up over my head, baring me to his heated gaze. “Ah, Pen.”
My hands find his back and smooth over his muscles, feeling them ripple beneath his shirt as he slides one bra strap over my shoulder. His breathing is heavy, his gaze intense as his head dips down to press a soft kiss to my bare skin.
He slides the other strap off, slowly, gently, carefully unwrapping me as if he is teasing himself. I arch my back, offer my breasts for the pleasure of his mouth. Beyond rational thought, I am lost in sensation, a seething, yearning mass of want.
Jack traces his finger along the edge of my bra, leaving a burning trail across my skin. With painful slowness, he eases the cups down, releasing my breasts from their restraint. I gasp when my burning skin comes into contact with the cool air, and my nipples bead so hard they ache.
I want his mouth on me, his lips, and his heat. But he doesn’t oblige. Instead, he traces a finger around my nipple. Around and around until I tangle my hands in his soft hair and pull him down to my breast. “Please.”
“You’re making it very difficult to go slow.” He feathers hot kisses across the curve of one breast, moving down to draw my left nipple between his teeth. I moan as he licks and sucks, nips and bites, while his other hand squeezes and caresses my right breast. My thighs fall open, inviting, and he lowers his hand to my leg and traces his finger slowly along the sensitive skin of my inner thigh.
I have never known lust like this, want so fierce I burn, need so intense I ache. He is a master of manipulation, a purveyor of pleasure. He knows just where to touch and how hard. He knows how to drive me up and take me down, when I can’t take any more and when it isn’t enough. I try not to think about where he gained all that knowledge, the countless women he’s been with, the things he has done to them in his room at the club. I pretend I am the only one he has caressed into a haze of lust, the only one he wants.
I open my eyes to see him watching me, assessing my reaction to his touch. I feel at once stripped bare and treasured by the intensity of his focus. He moves to my other breast, pulling down my bra cup, teasing and torturing my nipple with his mouth. He trails his fingers up my thigh and then cups the curve of my sex, over my wet knickers. I let out a guttural moan and in seconds he’s on top of me, as if I’ve broken his self-control. He kisses me hard, rough, grinds his hips against me as he presses me into the couch. I reach for him, and he grabs my wrists with one hand and pins them over my head. He pushes my knickers aside and strokes a thick finger along my labia while he sucks and bites my nipple until I am writhing and groaning beneath him.
“Please,” I moan. “Please. Please. Please.”
“Tell me what you want.” He buries his face in my neck, bites down on the sensitive skin at the top of my shoulder.
“Sex. I want to have sex. I want you inside me. Now. Take off my clothes.”
His hand tightens on my wrists so hard it hurts. “I don’t have normal sex,” he growls. “If I take off your clothes, I’m going to hurt you. I need your pain, darlin’. Can you give it to me?”

Sarah Castille is the New York Times and USA Today bestselling author of the Redemption Series, Ruin & Revenge Series, Sinner’s Tribe Motorcycle Club series, Legal Heat series and the Club Excelsior series. A recovering lawyer with a fondness for dirty-talking alpha males, she now is a full-time writer, who lives on Vancouver Island.

Sarah loves to connect with readers. Visit her website and sign up for her newsletter to hear about new releases: http://bit.ly/LgFZlb

Follow the tour
Visit all participating blogs for more chances to WIN!