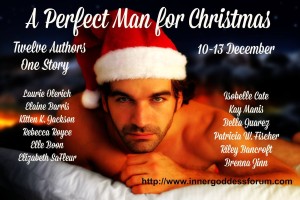 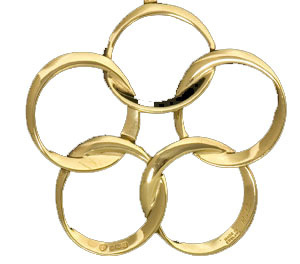 Wynter barely kept herself from ending the man standing in front of her with a slash of her talons. A sound behind them alerted her to the approaching group of partygoers. “You are a man who does not keep his word. For that, you will not find satisfaction again unless it is with your one true love.” She let her magic flow into him, knowing he had no clue he’d just been dealt a proverbial cockblock.
“Whatever.  You got off. I got off. I say we are even.” He turned away, stumbling into the wall on unsteady feet.
She decided the night had been a bust, but her body burned for fulfillment. Goddess, she wished for the green-eyed Michael. Shaking thoughts of him out of her mind, she headed toward the front of the club to catch a cab. There had to be a way–an easier way–to find the perfect man for her to bring. She’d look in the Book.
Laughing as she thought of the Christmas tale and why she hadn’t thought of it before. Five golden rings, and it had been five days, which now leads her to the Book–the sacred tome her family had kept as a diary of sorts throughout history. Surely if there was help to be had, it was in there.
“I need you to take me to the Warehouse District downtown.” She gave the cabbie the address. He eyed her up and down through the mirror.  Probably thinking she was a hooker in her club outfit. She kept her thighs together, not wanting him to get a peek at her panty-less state.
When she sat back, crossing her legs, she had no doubt he was hoping he’d get a glimpse. Wynter gave him a frosty glare. Michael would be able to help decipher some of the old text in the Book, and help her with her other problem.
A shiver of awareness and need worked its way over her flesh at the image of a naked Michael. Wynter hadn’t been paying attention to the passing scenery and was surprised to find the cabbie hadn’t taken her to the address she’d requested.
She rolled her eyes. “Excuse me. This isn’t the location I asked to be taken to.” Seriously, she wondered if her luck could get any worse.
“Listen, I know you’re a working girl. What’s your rate?”
Wynter laughed. “Darling, you can’t afford me. However, if you put the car in gear and take me where I requested, I will let you live.”  The threat wasn’t empty. She allowed her talons to lengthen, letting him see the black claws.
“What the…what are you?”
“I am a client who you picked up and asked you to take somewhere. Now, take me where you were supposed to.” She sat back, her gaze fierce. “Don’t make me hurt you. The mess would be traumatizing for the both of us.”
He swallowed audibly, his pudgy face a deep shade of red, which was better than the deathly white he’d become when she’d had to flash her talons. Wynter swore the world was becoming nothing but idiots.
As the cab came to a stop outside the location of Michael’s office building, she was disappointed to find it dark inside. She’d been sure he’d be there. The man practically lived at his offices.
“Fuck me running.”
“Not on your life.” The cabbie glared at her from the front.
Wynter rolled her eyes but spoke to him as if he was a child, which most men like him were. “Even if you were the last man on earth I wouldn’t screw you. Now, take me home.” She rattled off her address, already knowing she was going to put a spell on him. She couldn’t allow him to do to another woman what he’d try to do to her. The thought that some defenseless person would fall into a trap like he’d tried with her made anger burn in her veins.
When he stopped outside her home, the sound of the locks popping instantaneously was almost comical. Keeping her breathing even, she thought of the right words to say so the spell would take hold and last forever. She let her power out, a whip of lasting words lashed him. He jerked as if hit by a force much greater than a tornado whipping through the small vehicle. Satisfaction curled her lips when he slumped in his seat breathing hard.
“You will never harm another. Goodbye, little man.” Wynter tossed a twenty dollar bill into the front seat.
She hoped she found something within the Five Golden Rings tome that would help her in finding the perfect man. Her body still burned from unfulfilled desire, and she cursed the fact Michael wasn’t where he should have been. Her night had started with such promise.
“Gah, how did my life become such a dang mess?” Shedding her clothes on the way to her bedroom, she had a quick shower before flopping into bed naked. The cool sheets on her still overheated flesh did nothing to ease her.
Check out all of Elle’s books at http://www.elleboon.com/ 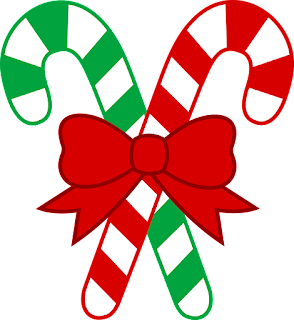 For the next stop in the blog hop – go to Inner GoddessForum
And don’t forget to enter the Rafflecopter for a chance to win a$25 Amazon gift card, courtesy of the Inner Goddess Blog!