Plain. Ordinary.  That is how Toni sees herself, and how she believes everyone else sees her. Being one of eleven children is bad enough, but being only ordinary child among 10 prodigy siblings is worse.  It has been up to her to take care of the little ones and coordinate their lives.  Who knew that would be the training she needed to deal with hockey playing Shifters.

Ricky sits and waits for the entertainment to come to him.  One look at Toni and the brood that tags along with her, and he knows the entertainment would be bountiful.  There is never a dull moment in Toni’s life and Ricky makes sure he has ringside seats for it all.

Ricky is Toni’s voice of reason.  She needs time and distance from her suffocating family.  When a job opens up that seems was tailor made for her, Ricky refuses to let her give up. 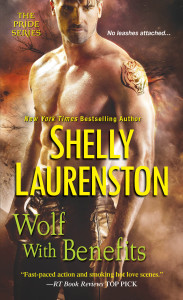 There’s nothing like a good ol’ boy wolf. And ace security expert Ricky Lee Reed serves, protects and seduces with all the right moves…

Sure, Toni Jean-Louis Parker has to be the responsible oldest sister to a crazy-brilliant clan of jackal siblings. But now she’s cutting loose for some hot, sweaty, no-commitments fun—and the sexy, slow-talking, swift-moving predator assigned to keep her family safe is just the right thing to shapeshift her love life into overdrive. Trouble is, he’s starting to get all obsessive wolf on her every time he looks in her direction…

Getting serious about anyone isn’t in Ricky Lee Reed’s plans. Hell, even now he doesn’t really have a plan—outside of catching whoever is threatening this dangerously brilliant family. But the more he sees of Toni, the more he’s howling for her. And whatever it takes to convince her that what they have is everything, well, this wily wolf is down for the sizzling chase…

Originally from Long Island, New York, Shelly Laurenston has resigned herself to West Coast living, which involves healthy food, mostly sunny days, and lots of guys not wearing shirts when they really should. Shelly is also the New York Times bestselling author G.A. Aiken, creator of the Dragon Kin series. For more info about Shelly’s books go to www.shellylaurenston.com. Or to check out G.A.’s dangerously and arrogantly sexy dragons go to www.gaaiken.com

Thank you so much for reading and reviewing WOLF WITH BENEFITS!

i really love this series and wish she was doing more of them, but at least Bite Me was a hell of a series finale.