Trouble Walked In by Michelle Roth

Hi there, everyone! I’m Michelle Roth and I’m here to introduce my latest release, Trouble Walked In [The Forsaken Few 1]. This story started as a submission for the Bad Alpha Anthology but quickly grew out of control with regards to word count. There was no way I was going to be able to tell the story I wanted to in a measly 10,000 words!

Once it was clear that I wasn’t going to be able to tell the story I really wanted to tell, I decided the book was more important than the anthology. It became MUCH easier from then on! I decided that rather than just a wolf shifter story that I would make this about something larger. Lorelei, Florida was born.

Each forsaken by their own kind, a small community of shifters from all walks of life have come together to form an unbreakable bond that defies the laws of nature. Both the hunters and the hunted stand side by side to protect themselves from all who would threaten their way of life. 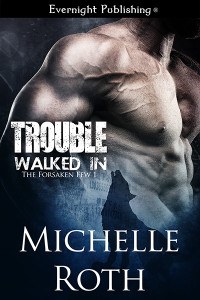 This is Ronan and Moira’s story…

The moment Moira Devereaux walks into his bar, Shapeshifter Ronan Kelly knows she’s going to be trouble. No matter how tempting she is, he won’t risk the safety of his makeshift pack. He has every intention of sending her on her way until he hears her compelling story.

When Moira’s father, the mayor of Lorelei, tries to force her to wed a man she doesn’t know, she runs to one place he won’t follow. The local shifter bar. Nothing could have prepared her for the immediate attraction she feels for the owner, Ronan.

In a moment of weakness, Ronan offers her a job and a place to stay despite his misgivings. No one is more shocked than he is when he discovers that she’s his mate. Will he be able to convince her that he’s worth taking a risk on or will he be forced to let her go?

Twenty minutes later, his energy restored, he wandered into the kitchen. He grinned when he found Moira making a sandwich. “Hey, gorgeous,” he said, feeling lighter than he had in a very long time. He leaned in and pressed a kiss to her neck.“Hungry?” she asked, tilting her head to the side. When he continued to press light kisses against her skin, she set the package of cold cuts down on the counter. Seconds later, she leaned back against him and gave a soft hum of pleasure.“Not for food,” he murmured, nipping at the soft bit of skin just below her earlobe.

Moira pressed her hips back against him and playfully asked, “What are you hungry for then?”

He grabbed her and held her back against him. Then he moved his mouth so that it hovered just above her ear. “You know exactly what I want, cupcake. And you’re gonna give it to me.”

“Oh, am I?” she teased, moaning softly when he began to rock his hips against hers. “What if I just wanted to eat this sandwich and go to bed?”

His hands slipped up to cup her breasts through the thin cotton tank top she wore. Stroking her nipples, he waited until she shivered against him. “I’ll make you a deal.”

The voice trembled with need when she asked, “What kind of deal?”

“If I reach down into your panties, and I don’t find you soaking wet,” he said, his hands trailing down her belly to work at the button of her jean shorts. “Then, by all means, have your sandwich and go to bed.”

“Okay,” she agreed, rocking her hips back against him, her feigned disinterest long gone.

“But if I do find your pussy as soaked as I think I’m gonna,” he continued, “then I own this body for the rest of the night. Sound fair?”

“You sure about that, cupcake?” he asked, his own voice rough with need. “I’m not going to go easy on you.”

No longer able to manage the pretense of disinterest, Moira whispered, “I don’t want you to.”

“You don’t know what you’re asking for.” He groaned, his fingers slowly dragging the zipper of her shorts down. At her shuddering breath, he slipped his hand inside her panties and said, “As I suspected. Cupcake, you’re not going to sleep any time soon. You better have the sandwich, though. You might need your strength.”

Michelle Roth is a novelist from the Great White North (Toronto, ON). When she’s not disappearing into foreign lands, or making two perfect strangers that she invented fall in love, she’s probably curled up somewhere with a glass of wine and a good book.

In her spare time she is typically hanging out with her awesome boyfriend and their two equally awesome cats. She likes taking road trips to nowhere in particular, cooking elaborate meals then making other people do the dishes, and being nerdy on the internet. Her books are currently available on Amazon, Nook, Kobo, and any other place that sells absolutely filthy romance novels.

Thanks so much for having me on your blog today. As always I appreciate it! <3