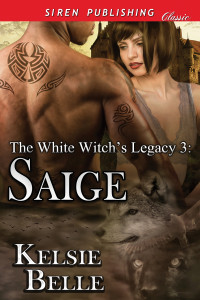 Haunted by the curse of a tormented past, Damien Thorn doesn’t believe love and a happily-ever-after is in the cards for him. A witch hunter and slayer who despises everything that has to do with witchcraft, he finds himself in a very uncomfortable situation when he has to help his adopted brother find his mate’s sister, who happens to be a witch. Soon, just a sniff of Saige Callahan’s peculiar scent has him panting after her and wanting things he vowed he would never want from any witch. Never did he expect to be drawn to her the way he is and he’s determined to stay away from her, even if it killed him.

One look at Thorn’s luscious physique has Saige convinced that she has to have him, even if it’s just for one night. But how can she even get close to him if he’s determined to hate her at all costs? Can she cast a spell on this jaded shifter to make him see that all witches weren’t created equal?

This is the third and final book in this trilogy.  We finally find the third sister, Saige.  Saige was raised to believe in science, that monsters we not real.  She does remember a nightmare with a monster but was always told it was just a dream.  Thorn’s life was torn apart by witches.  He swore to avenge his parents and rid the world of them.  Until his “brothers” fell in love with Raven and Eryn.  When he meets Saige in the woods he is convinced that she has bewitched him.  What I got out of this book, is don’t judge a group of people just because of a few bad apples.  I can’t tell you what happens in the story more than this because it would give too much away.  I really enjoyed reading the story and in fact, it only took me two hours to read.

A sudden movement in the bushes made her snap back to reality with a little jump. Biting back the sudden pang of fear, she forced herself to remain still and listen for a moment, but she didn’t hear the peculiar sound again. She expelled a breath of relief, realizing that her mind was probably playing tricks on her. In any case, it was perhaps time to get out of the water now. God only knew how long she’d been in here already. She hurriedly made her way to the riverbank, drying off and dressing in record time. But as she was gathering her belongings, she suddenly heard the movement in the bushes again.

Another jolt of fear coursed through her, and she had to force herself to tamp it down. It was probably just an animal passing by, or maybe the tree branches rustling in the breeze. Absolutely nothing to be afraid of. She hurriedly began to make her way back to the campsite, moving her feet as fast as she could and looking about her wildly despite her efforts to remain calm. She was still several feet away from the cabin when a low growling made her stop dead in her tracks.

Fear made her throat constrict like a closed-off tunnel when she noticed a pair of gleaming amber eyes peering at her through the darkness. The rumbling growl sounded again, louder this time, and then the owner of the eyes began moving closer toward her. The crunching of leaves under the creature’s feet resounded in her ears like firecrackers. She could tell it was advancing on her, but she still couldn’t make out its figure in the dim moonlight. She had no idea what it was, couldn’t decide whether she should turn and run or stand her ground and try to fight it off.

Instinctively she began moving backward, calculating her best options for escape as she did so. At that moment, the animal made a sudden pounce, and she finally got to see what it was in a thin glimmer of the moonlight—a humongous black cat. Shocked, she opened her mouth to scream, but no sound escaped. Without another thought, she spun on her heels and made to run in the opposite direction, but before she made even one step, the cat was in front of her again. What the hell? Is there more than one of them?

“Stay back!” she yelled, crouching to find something on the ground to defend herself.

The cat just growled again and began stalking toward her once more.

“Shoo! Get out of here!” she tried again, waving a stick she’d picked up. Still it came at her.

She backed up some more, inching away from the animal as cold dread settled in her stomach. Soon her back was pressed up against the trunk of a large tree, and the cat was right in front of her, its amber eyes piercing her in the darkness. What the hell was she going to do now? This creature could tear her to pieces in less than a minute.

“Nice kitty,” she whispered, her voice shaking under the stress of her fear. “Are you hungry? I ha-have food…W-would you like something to eat?” God, I must have lost my mind! Talking to a wild animal like it was a house pet was definitely sheer insanity.

Just when she thought it wasn’t possible for her to be any more petrified, the animal suddenly began shaking, and then something completely unbelievable happened—it transformed into a very large man right before her eyes. Saige’s heart immediately jumped from her chest to her throat, blocking off the scream she desperately wanted to let out.

The man cocked his head to one side, his amber eyes gleaming in the moonlight just like the black cat’s had, and whispered, “Don’t you know it’s not safe for little girls to go off into the woods all by themselves?”

That was the last thing Saige heard before she crumpled to the ground in a dead faint. 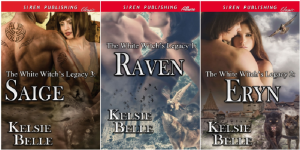 Want to start from the top?

When Xander Kane meets a delectable exotic dancer in a bar, he is instantly drawn to her striking beauty. He knows he has to have her, but when he finally convinces her to let him take her home, she disappears without a trace after they share an electrifying night together. He never thought he would see her again, but when fate takes her right back to his doorstep he is intent on making her pay for running out on him like she did. But Raven is not what she seems, and the secrets she hides, coupled with his own dark skeletons, threatens to destroy any hope that Xander harbored for them.

Raven embarks on a perilous journey to protect her mother’s legacy and finds herself fighting for her life at every turn. When she meets Xander Kane, he is everything she wants in a man and everything she cannot afford to let herself have right now. Will they be able to overcome the obstacles that confront them at every turn and find their way to love?

Eryn Lancaster is grieving the loss of the only family she’s ever known, her grandmother Clarisse. She wants to sell their little business and move away from the village she has lived in all her life, in order to get over the pain of loss. Then a gorgeous business man walks into her little bookstore-cafe with an offer to purchase and turns her whole world upside down. But Eryn is in for the shock of her life when she finds out who she really is and just why Asher Valentino sought her out.

Ash is on a mission to help his brother’s girlfriend, Raven, find her long lost sister, in order to defeat an evil sorcerer. But when he finally finds the enchanting beauty called Eryn Lancaster, the mission becomes the last thing on his mind. He wants her and he plans to have her by any means necessary. He plays a dangerous game of deceit by omission that almost gets him the prize he desires most, Eryn’s body. But he soon learns that lies and lust could cost him the prize that he needs the most, her love.

She has been a storyteller for as long as she can remember, her characters live inside her overactive mind and a thousand stories come to life in her head every day. This her first paranormal series The White Witch’s Legacy. It promises to be an exciting trip into her wild imagination and she hopes her readers will enjoy the experience of taking a ride outside the ordinary with her.

📂This entry was posted in Reviews Uncategorized