Gavin is a member of the rock band Sphere of Irony. He always receives threatening letters, heck many stars do in one way or another, however, he now has a stalker that is leaving “gifts” no one would ever want. The label hires Mitch to help figure out who is stalking and threatening Gavin.

Gavin wakes a part of Mitch he has denied for a long time. Once together, Gavin will rock more than just his music, he will rock Mitch’s world.

It was interesting to watch Gavin and Mitch come to grips with their sexuatlity and their budding relationship. The last chapter was my favorite, because I am a sucker for a happy ending and that Mitch gets his song. 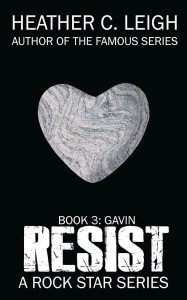 All Gavin Walker, bass player for the multi-platinum selling band, Sphere of Irony, wants to do is surf, play music, and occasionally get laid. The problem is that Gavin has a stalker. A potentially deadly one. The threats he receives always mention something about Gavin being gay, which isn’t public knowledge since the record label wants to keep it quiet.

Mitch Hale used to track serial killers for the FBI. A live-changing incident led him to quit the bureau and start his own company providing computerized security for Los Angeles’ wealthiest people. Mitch doesn’t know anyone when he moves across the country from D.C. to California, and all he has for companionship is a pathetic string of failed relationships with women.

When Gavin’s manager hires Mitch to find the stalker, the men instantly hate each other. Despite the constant fighting, attraction between the two blazes hot, confusing the former FBI agent. Spending time with Gavin forces Mitch reflect on what he’s denied about himself for the last ten years. Listening to Mitch’s plan to catch a madman thrusts Gavin’s personal life out in the open for the entire world to see.

Can Gavin and Mitch stop fighting long enough to stop a stalker before someone gets hurt? Or will they stubbornly resist the feelings that develop when they’re forced to work together?

This is book 3 in a 4 part series. It is a spin-off of the Famous Series. These can be read as standalones.

Incite (Book One) The Sphere of Irony Series

After growing up in New England, I (Heather C Leigh) currently live just outside Atlanta, GA.  I love the Red Sox and hate the Yankees.  I love hot, sexy romance novels, but hate long, drawn out misunderstandings as a plot line.  I love book series, but hate cliffhangers.  I love alpha males, but hate when they borderline on abusive.  Mostly? I love love love chocolate. 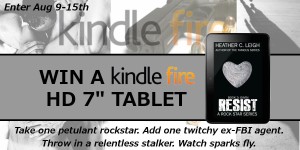