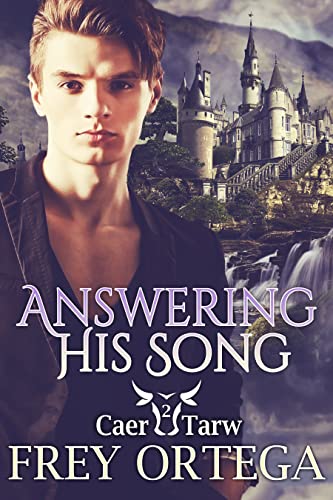 Welcome to Caer Tarw—an idyllic castle and village in beautiful, scenic, rural Ireland. The home of a herd of…Minotaur?

One day, Caer Tarw guest and sparrow shifter Merritt Lang finds himself in a bit of a predicament. Thinking he is alone, he hums a little tune. What he doesn’t know is that there are two minotaur nearby, and for inexplicable reasons, they’re drawn to his voice.

David Finley and Connor Monaghan are minotaur. They’re also best friends and sometimes lovers. Connor is surly and foul-tempered. David is the one who has to keep him grounded. When they hear Merritt’s song, however, the two of them find themselves mesmerized… and almost drown themselves in the process.

Merritt is distraught. Not only has this never happened before, but now he finds himself with the attention of David and Connor who want to understand why his voice affects them, and who also want desire him as their third.

How will the two minotaur answer Merritt’s song?

ANSWERING HIS SONG was first released in 2015, but has been re-edited, reworked, and completely revamped! At its heart is still a soft, fluffy romance set in a paranormal setting with dominant Minotaur, sweet yet naïve sparrow shifters, and a lot of heart.

She loves writing about people, especially people of all different shapes, sizes and backgrounds, falling in love. You might also find her playing video games from time to time! Her favorite ones are MMORPGs, and role-playing games in general (and not just the ones in the bedroom.)