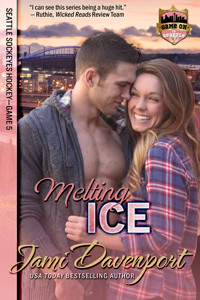 Brimming with attitude and broken beyond repair, Isaac “Ice” Wolfe has a heart as cold as his nickname, and he likes it that way–until he meets his neighbor Avery Maxwell. Avery is unlike any woman he’s ever known. Her smile thaws his frozen heart. Being with her heals his broken places. She makes him feel, and for Isaac that’s not always a good thing. Isaac has burned every bridge in his professional hockey career. When he’s traded to the Seattle Sockeyes halfway through their inaugural season, he knows he won’t get another chance. He’s never been a team player, yet he needs to become one–and fast.

Avery has only wanted one thing in her life–to train and show horses. Her decision to drop out of college to pursue her riding career causes a rift with her big sister, but Avery is tired of following everyone else’s dreams. Now she’s following her own, and no one is going to distract her from her passion–until she meets a dark stranger and his cantankerous dog.

When Isaac is warned away from Avery by the team’s captain, who happens to be Avery’s future brother-in-law, Isaac sees the writing on the wall. It’s Avery or his career. To Isaac, a life without hockey wouldn’t be a life worth living. But what about a life without Avery?

Do Isaac and Avery sacrifice their life’s passions for their mutual passion for each other, or do they fight to have it all, even if by doing so, they might lose everything in the end?

While all books in this series can be read as standalones, you’ll likely enjoy the other books in the Game On in Seattle sports romance series:

*Please note:  Jami Davenport will not publish a book until she thinks it is ready.  As such, I did not receive an ARC until right before release date.  This weekend, I had prior commitments, therefore, I was not able to read and review Melting Ice in time for this blitz.    I have signed up for her blog tour and am scheduled July 6th where I will publish my review. *

Q.  Who is your favorite character from your book and why?

A.  They’re all my favorites. I love them all.

Q.  Do you have any unique talents or hobbies?

A.  I rode and showed horses in dressage for 30 plus years, so I guess my unique talent would be dressage riding.

Q.  What can we expect from you in the future?

A.  I’m branching out into football and baseball. Eventually I’ll have three teams all set in Seattle, all part of the same series, so you’ll see old favorites from my Sockeyes Hockey team show up in my Steelheads football books. Eventually, I’m also going to merge the Evergreen Dynasty series and the Madrona Island series. I’ve already merged Evergreen Dynasty with the Game On in Seattle series by using some of the characters from ED in GoiS.

Q.  What can readers who enjoy your book do to help make it successful?

Q.  Do you have any tips for readers or advice for other writers trying to get published?

A.  Research your publishing options, make sure you’re making the right choices for you. Don’t sign a contract because you think that’s the best you can do. Instead think of the best case scenario for you career in five years and plan accordingly. Don’t sell yourself short.

Q.  Do you have a specific writing style?

A.  I think my writing style is more conversational than many authors. I find that a reader will love my books or hate them. There’s not a lot of middle ground. I was told by an author friend once that’s because I have a strong voice, which is also why I don’t do well in contests and quit entering them years ago.

Q.  Is there a message in your book that you want readers to grasp?

A.  Family matters, whether it’s blood or the family you’ve built within a team or a group of friends.

Q.  What is your favorite theme/genre to write about?

A.  Damaged souls healing through love.

Q While you were writing, did you ever feel as if you were one of the characters?

A.  Yes, I call it in the zone. If I’m so deep into those character’s heads that I become the characters, I call that a good day of writing.

Q.  How are you the same/different from the main character?

A.  Almost all of my female characters have a bit of me in them. They’re usually strong, independent, smart, straight-forward, opinionated, not domestic in the least, and career oriented. So far not one of them has been gotten accidentally pregnant because I strongly believe there are few viable reasons for that to happen. You also will NEVER see a secret baby story from me which involves the heroine keeping the hero’s child from him. My husband and I have lived that particular nightmare, and I cannot find any way to redeem a woman who would do that to her child, unless the man is abusive—but then he wouldn’t be hero material, would he? I do want to try a marriage of convenience though. I love those books, but they’re tricky to pull off in a contemporary.

Thanks so mcuh for hosting my book!!!