This book is actually a 2 for 1. Not only is this the story of Trace, Laci, and Lucas, but we also get the benefit of learning the story of Angela and Ricoh.

In true Lusty fashion, Laci comes to Lusty with a past that is catching up to her. As she tries to move on with her life the best she can, she meets Trace and Lucas. Although she tries to hold them off emotionally, there is no chance for that wall to hold.

Trace and Lucas came to Texas to learn more of the family that was kept from them. Then, they were going to move on. They thought they would drift in, then drift right out. They might have too if they hadn’t meet Laci.

I really enjoy the Lusty, Texas series. Every book is a new love story, but with each book you feel like you are coming home for a visit. Characters from books past come together and you “know” them. If you haven’t read this series, you really should. 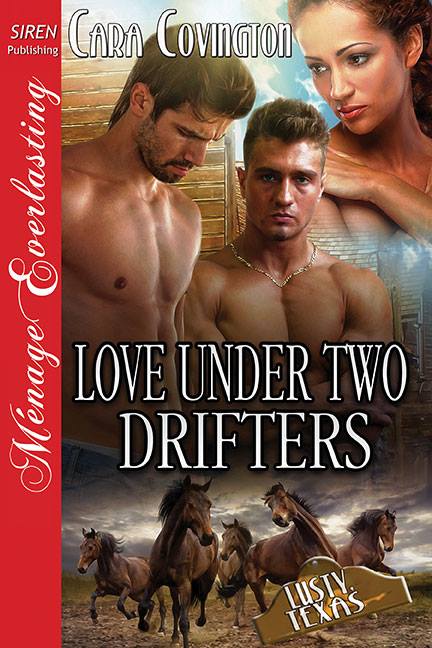 Laci Sinclair came to Lusty at the urging of her best friend, Chloe Jessop. The last thing she needs is romance. So how did Trace and Lucas Benedict get under her skin so fast?

Trace and Lucas leave Montana to find a place of their own, with a stop to visit their cousins in Lusty. Once they meet Laci, they know their drifter days are over. Though leery of working with family again, they give their cousins the benefit of the doubt and decide pretty fast they like family, Lusty style.

They hope to cure Laci’s relationship reluctance with two men ten years her junior by offering to be her “friends with benefits.” But they soon discover she’s hiding something from them—and that something could end their love before it ever truly begins.

Meanwhile, Ricoh Stone knows it’s time to find out about Angela Monroe’s past, and he turns to a rodeo  friend who now lives in Divine—Julián Alvarez.

Morgan has been a writer since she was first able to pick up a pen. In the beginning it was a hobby, a way to create a world of her own, and who could resist the allure of that? Then as she grew and matured, life got in the way, as life often does.

She got married and had three children, and worked in the field of accounting, for that was the practical thing to do and the children did need to be fed. And all the time she was being practical, she would squirrel herself away on quiet Sunday afternoons, and write.
Most children are raised knowing the Ten Commandments and the Golden Rule. Morgan’s children also learned the Paper Rule: thou shalt not throw out any paper that has thy mother’s words upon it.

Believing in tradition, Morgan ensured that her children’s children learned this rule, too.
Life threw Morgan a curve when, in 2002, she underwent emergency triple by-pass surgery. Second chances are to be cherished, and with the encouragement and support of her husband, Morgan decided to use hers to do what she’d always dreamed of doing: writing full time.

Morgan has always loved writing romance. It is the one genre that can incorporate every other genre within its pulsating heart. Romance showcases all that human kind can aspire to be. And, she admits, she’s a sucker for a happy ending. Morgan also publishes as Cara Covington.

Morgan’s favorite hobbies are reading, cooking, and traveling – though she would rather you didn’t mention that last one to her husband. She has too much fun teasing him about having become a “Traveling Fool” of late.

Morgan lives in Southwestern Ontario, Canada, with a mysterious cat that just showed up one day, a dog that still has no dignity, and her husband of forty-two years, David.

« Until Jax A Soldier’s Dawning »