Grown up with a silver spoon in his mouth, Boone was destined to go to an ivy league school However he wasn’t going for business, medicine or law, he was going for hockey. Top collegiate goaltender, Boone has a secret he has kept his whole life. He is gay. Pro sports teams might be more accepting of his sexual preference, but in school or in his family, he has to hide.

Preston is a former figure skater who, after an injury, can’t do jumps anymore. So he can still be on the ice he loves, he becomes the new mascot for his schools ice hockey team. He is not just gay, he is flamboyantly gay. Open and proud.

The minute Boone sees Preston, he knows he is in trouble. His secret is threatened to be revealed. With Preston’s help, Boone learns to accept himself as a gay man and supports him when he needs him the most. Boone might lose almost anything, but he will gain the love he never had. 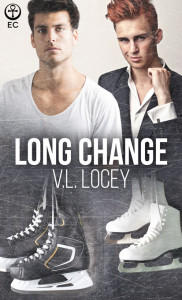 Collegiate superstar goalie Boone Crockett seems to have the world at his feet. He’s rich, handsome, attends an elite college and is a hot prospect for the pros. Pity all that is a front for a deeply closeted and troubled young man.

All Boone’s life plans are shattered when flamboyant ex-figure skater Preston Gordon, an orange-haired twink, shows up to audition for the team’s mascot position wearing sequins, scarves and toe picks. His moves on the ice send Boone into his own pirouette of frustrated and reluctant desire.

As senior year progresses Boone slides deeper and deeper into a dangerous depression, Preston’s sensual strength the only thing he has to hold on to. If Boone can’t keep from plunging through the thin ice he’s skating on, it could take a twink to make the big save.

When not writing spicy romances, she enjoys spending her day with her menagerie in the rolling hills of Pennsylvania with a cup of fresh java in hand. She can also be found online on Facebook, Twitter, Pinterest, and GoodReads.

Where to find the author:

Thank you so much for hosting me and for the lovely review!