Embrace the Fire: Through Hell and Back # 3 by Felice Stevens

This is the the story of the third foster brother of Ash and Luke, Brandon.  In this book, we learn what really happened to Brandon after he left the foster house.  I really felt bad for him.  But it does go to show you  that this is a small world.  Who would know that someone he works with would introduce him to Tash.  Tash has been destroyed by the death of his partner and learning of his lies and drug use.  When Randy comes through the door of the clinic, for the first time, he considered moving on…..with him.

I love that the brothers finally reunite and we learn what happened the the foster parents.  I love that the end of the book we catch up with everyone all over again.  But I love Esther the most.  She is like the relationship whisperer. 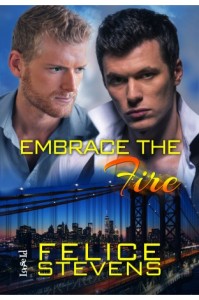 Brandon Gilbert has spent years in hiding, but finally he’s accomplished his dream of working as a public school teacher. When offered the chance to help bullied children, there was no way he could say no. Not to mention that meeting Dr. Tash Weber, the psychiatrist who helps them, a sad yet sexy older man, ignited a spark inside Brandon he’d never had before.

Though five years have passed since the death of his lover, Dr. Sebastian “Tash” Weber has no interest in relationships or love. But young, enigmatic Brandon awakens his heart and his desire. Despite Tash’s best efforts to push him away, Brandon unlocks the passion for life Tash thought he’d lost forever.

Falling in love wasn’t part of the plan for either Brandon or Tash, but neither family disapproval nor self-doubts can stop them from embracing the fire that burns between them. And when Brandon returns home to fight for a future he never imagined possible, he and Tash discover that the one thing worth fighting for has been with them all along.

I have always been a romantic at heart. I believe that while life is tough, there is always a happy ending just around the corner. I started reading traditional historical romances when I was a teenager, then life and law school got in the way. It wasn’t until I picked up a copy of Bertrice Small and became swept away to Queen Elizabeth’s court that my interest in romance novels became renewed.

But somewhere along the way, my tastes shifted. While I still enjoys a juicy Historical romance, I began experimenting with newer, more cutting edge genres and discovered the world of Male/Male romance. Once I picked up her first, I became so enamored of the authors, the character-driven stories and the overwhelming emotion of the books, I knew I wanted to write my own.

I live in New York City with my husband and two children and hopefully soon a cat of my own. My day begins with a lot of caffeine and ends with a glass or two of red wine. I practice law but daydream of a time when I can sit by a beach somewhere and write beautiful stories of men falling in love. Although there is bound to be angst along the way, a Happily Ever After is always guaranteed.

Thank you for hosting EMBRACE THE FIRE!