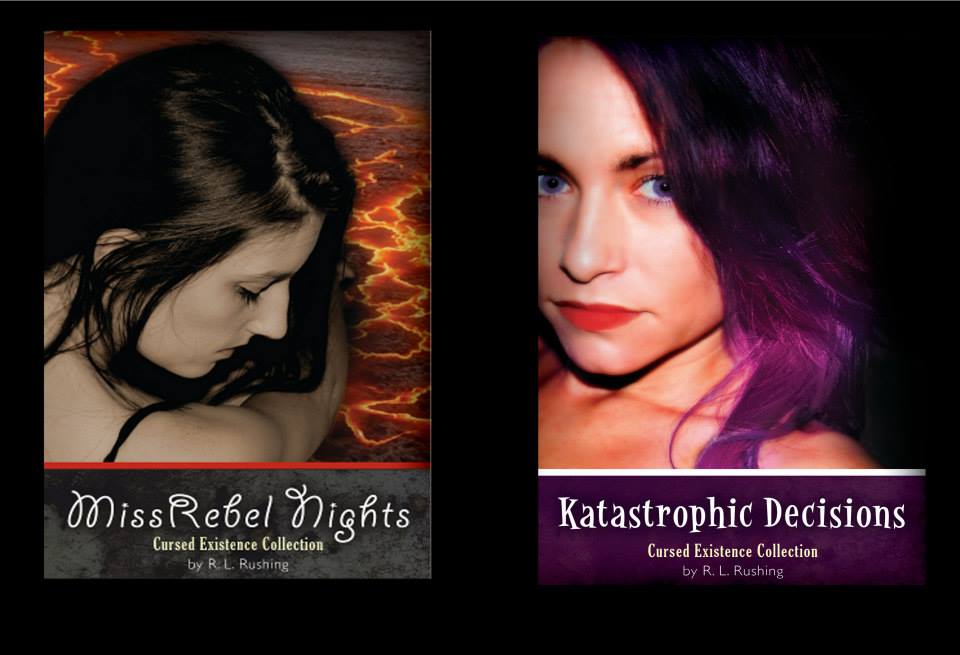 As stated in my last post, I had two authors solicit reviews from me recently.  One I reviewed in my last post on January 26, 2014.  The other was R.L. Rushing.   I am not paid in any way for this review.

Please note, that although she offered to provide me with a copy of her book, specifically Katastrophic Decisions, I decided to buy both  Cursed Existence Collection directly from Amazon so that I could understand what is going on in the series.  What I know now is, I really did not have to.  I did read MissRebel Nights first, but since Katastrophic Decisions is technically a prequel, it can stand alone.
Now when you are solicited for reviews, to accept or decline a book is a crap shoot.  Will it be a good book, or one that you have to really push through and hope there is something there to redeem it.  Will I regret accepting this book, or will I be pleasantly surprised.   Well this one was definitely the latter.  The best thing I did was decide to pick up MissRebel Nights in anticipation of Katastrophic Decisions.
MissRebel Nights keeps you engaged and intrigued from page one.  It is one thing to feel for Rebel and what she went through at the hands of an abuser, but to find out the horrorific premonitions she sees during the abuse keeps you begging for more.  It is when Rebel gets back together with her childhood sweetie, Dalton, that events of the past  and her  role in the fate of the planet are explained.  During her quest to save the world, she is literally thrown together with other women just like herself.  Together will they save the world?  This book is science-fiction meets romance meets action adventure.  I could not put my Kindle down.  I stayed up to 3am just to finish this book.  It kept my attention and interest.  It ended with me begging for more.
MissRebel Nights deserves:

I have to be honest. When I first agreed to review this book, I didn’t read the synopsis.  So, when I started to read Katastrophic Decisions, I didn’t know it was a prequel.  I took two seconds to mourn the fact that MissRebel Nights was not continuing.  Then, I relished the fact that I get to fill in the blanks and have the back story on Kata.  Where MissRebel Nights is m/f romance, this one is f/f.  Just as Rebel and Dalton are soulmates and fell in love at first sight, Kata falls for Levin at first song.  Although Kata is not gay at the beginning of this book, it goes to show you the heart will love whom it wants to love.  Where Kata can heal anyone, it is only Levin who can heal Kata.  There is no stopping this relationship from happening, although it will be delayed at times.  I love how we go from her beginning to her abduction in the same book.
Katastrophic Decisions gets:

Here are the blurbs for each book:

“Katastrophic Decisions serves as the back story of Katarina Redford, a healer.  It takes place before she was ripped from her life and forced into Ledger chaos.

Some people would kill for the chance to be endowed with the ability to heal. However, Kata Redford and her few remaining family members have spent the past several years hiding in the rugged Oregon mountains from religious zealots and other crazies who seek to either punish her for her inherent ability or possess it for themselves. Now, at twenty eight years of age, she’s reached a pivotal moment in her life. Realizing that something she’d wanted so badly was not meant to be, with an open mind and an aching heart, she sets off to find her own path in life.

Unexpectedly, Kata is enraptured by the beautiful Levin Chase, an intriguing drummer for the band, Stage a Revolt. Through their equally undeniable attraction, Kata finally learns what it means to live life to the fullest. Thanks to Levin’s strong determination, they begin to build a rock solid future  on the heels of a nearly catastrophic decision. But as usual in her life, just when everything starts looking up, her world falls to pieces.”

“Rebekah Taylor, known by her friends as Rebel, has been plagued by vivid apocalyptic nightmares her whole life. It wasn’t until the ultimate betrayal of a family member that she realized the visions held much more importance than she could ever have imagined. Kittens and rainbows have no place amid the gritty, chaotic premonitions, nor the abusive situation from which she now flees.

Finding herself on the run from not only a madman she knows, but also an elusive psychopath who intends to use her abilities to fulfill his potentially world decimating objective, she leans on the supportive shoulder of a childhood friend and one true love, Dalton Fletcher. Quite dramatically, they discover that she is not alone in the world of extraordinary talents. Others exist who also play an integral role in the maniacal grand scheme. Along with the help of others who share her curse, she and Dalton set out on a path for answers to the never ending list of questions with which they’ve all been plagued. It will take them working as a team to escape certain extinction of a large majority of the human population as well as the possibility of being ruled by a murderous, self appointed dictator. What does the world look like on the opposite side of the devil’s reign? Does anyone actually survive?”

Born and raised in Northeast Louisiana, R.L. Rushing grew up on well water, dirt roads, deer meat and garden grown vegetables. Although it would be interesting to say she spent her time exploring exotic destinations and drinking wine from barrels in Tuscany, that is not the case. R.L. lived in the real world. Currently, her days are spent working in the ever exciting world of bookkeeping. Night time for her does not mean breaking into the Smithsonian to steal the hottest work of art to sell on the black market. In fact, the only work of art she’ll see will be created by one of her awesome kids while they’re doing anything possible to keep from getting in bed on time. As with every other small town girl, R.L. has dreamed of breathtaking adventures and schmoozing with the elite. She actually managed to make it about two thousand miles and a few months before realizing that the big city lights are better left to big city girls and her wild imagination. No adventure is as fulfilling as being wrapped in the strong arms of her love while surrounded by the laughter and arguing of our not so little ones.

R. L. Rushing can be reached via email, follow her on Facebook, and find her on Goodreads.