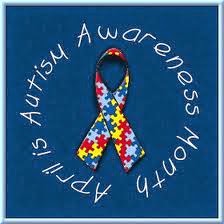 As you may or may not know, my son, Nicholas, is a child with Autism.  He was diagnosed with Autism Spectrum Disorder (ASD) when he was 7 years old.

There is considerable overlap among the different forms of autism. The wide variation in symptoms among children with autism, however, has led to the concept of autism spectrum disorder, or ASD.

ASDs affect one out of every 68 children in the U.S. They occur more often among boys than girls. While autism appears to be on the rise, it’s unclear whether the growing number of diagnoses shows a real increase or comes from improved detection.

Early diagnosis is important. That’s because early treatment can help a child with autism make significant gains in language and social skills.

-Communication — both verbal and non verbal

Each child with an ASD will have his or her own pattern of autism.

Sometimes, a child’s development is delayed from birth. Some children seem to develop normally before they suddenly lose social or language skills. Others show normal development until they have enough language to demonstrate unusual thoughts and preoccupations.

In some children, a loss of language is the major impairment. In others, unusual behaviors (like spending hours lining up toys) seem to to be the dominant factors.

Parents are usually the first to notice something is wrong. But a diagnosis of autism is often delayed. Parents or a physician may downplay early signs of autism, suggesting the symptoms are “just a phase” or a sign of a minor delay in development. Children with a possible autism spectrum disorder, though, should be evaluated by a professional team with experience in diagnosing autism.

Until recently, the types of ASD have been determined by guidelines in the diagnostic manual (DSM – IV) of the American Psychiatric Association. According to the CDC, the three main types of ASD are:

The new diagnostic manual has made some major changes in this list of disorders. It’s unclear, though, how these changes will affect the way health professionals define exactly what is an autistic spectrum disorder.

The mildest form of autism, Asperger’s syndrome (AS) affects boys three times more often than girls. Children with AS become obsessively interested in a single object or topic. They often learn all about their preferred subject and discuss it nonstop. Their social skills, however, are markedly impaired, and they are often awkward and uncoordinated.

Asperger’s syndrome is mild compared to other ASDs. Also, children with AS frequently have normal to above average intelligence. As a result, some doctors call it “high-functioning autism.” As children with AS enter adulthood, though, they are at high risk for anxiety and depression.

Since this is Autism Awareness Month, a wonderful blogger and author, Tammy Middleton, is holding an auction to raise money to be donated to the Autism Society.  Please click on the graphic below to see what is being auctioned off.

The Autism Society is the home of the Autism Awareness Puzzle Ribbon, one of the most recognizable cause-related symbols, and founded National Autism Awareness Month, which helps focus attention on autism in April of every year. The Autism Society’s 107 affiliates nationwide are incubators for local programs such as Safe and Sound, camps, respite care and social skills events.

The Autism Society supports research that will help families living with autism. Today, 67 individuals will be diagnosed with autism, and their families have no clear path for treating the symptoms of this medical condition. For this reason, the Autism Society has launched research initiatives to look into early diagnosis and early intervention, the environmental triggers of autism, environmental factors that exacerbate health conditions, and, most importantly, a comprehensive, coordinated treatment-guided research initiative.

For over 40 years, the Autism Society has hosted the largest conference on autism spectrum disorders each July.

Another charity that is close to my heart is Autism Speaks.

Whether you bid in the auction or donate to either The Autism Society or Autism Speaks, your support to find the cause and cure for Autism and the programs to help those affected by Autism is much appreciated.