SiKReviews 1 Comment
Every year since I started this blog, I have taken this day to repeat what this day in history was like for me.  Some of you may have already read this, and others never have.  Either way, I tell my story to heal my soul.
We all have a story.  We all know exactly where we were, what we were doing, and who we were with when we first learned of this tragedy.
My heart goes out to all those who died that day and for those first responders, loving citizens who worked downtown, and their families who have died since then due to 9/11 illnesses.  You are in my heart and prayers always. 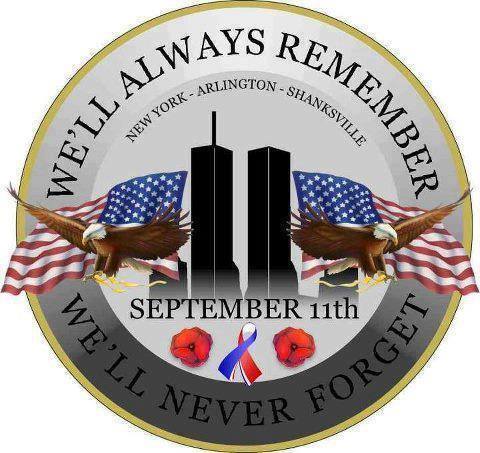 I would be amiss in blogging if today, of all days, I didn’t blog about the day that changed the U.S.  So, here is my story from that fateful day.
The morning of September 11, 2001 was a beautiful clear Tuesday on Long Island.  It was Primary Day here in New York.  My husband had taken me to vote and then he was going to take me work because he was off that day and was going to hang out with our then 7 month old son.  As we left the polling place, we heard on the news that a plane hit one of the Towers.  I don’t know if you know this fact, but it isn’t unheard of for that to happen in New York City.  As we were listening to reports, my husband (who at the time was getting his pilot’s license and had already soloed) shook his head and said that there is no way that plane was a small plane like first reports were saying.  His cop sense was tingling and he said I am taking us to your Mom’s house.  He said he had a feeling that he was going to be called in.
We arrived at my mom’s house and we got our first view of the Tower on the television my mom was watching.  Hubby was sure at that time that it was a large commercial jet and that it was almost impossible for this not to have been on purpose.  As we were discussing this, we saw before our eyes the second plane hit the Tower.  Like everyone else watching the events that played out on the screen we were open mouthed and wide-eyed.  Hubby kissed my son, who was now staying with my mom; got the stay safe speech from my mom; and then took me to work.  I kissed him and told him to pack extra underwear, deodorant, pop tarts and whatever else he can think of and be careful and that I loved him.
As I sit there at work, nothing work got done.  Hubby was called in and was told to get Floyd Bennett Field in Brooklyn to get assignments.  He called me to let me know.  That was the last time I spoke to him for 2 or 3 days.  Twelve (now 14) years later I can’t recall the actual number, but at the time, it felt like forever.  When I went online at work to one of the news stations; I watched as the Pentagon got hit, then each Tower fall, then heard of the plane crash in a field of Pennsylvania.  My heart went out to all of those people and their families and I couldn’t wait to go home and see my son.
A friend at work took me to my mom’s house and my mom took me home to pack a bag for me and my son so we could stay with her.  We didn’t know what would be happening and she didn’t want me to be by myself. Quite frankly, I didn’t want to be alone either.  We all prayed for everyone who was killed, injured, all of the selfless civilians and of course all of the NY/NJ/Federal  heroes who put their own lives at risk to save others.
After I finally heard from Hubby, I realized I could finally breathe.  Felt like I stopped when I kissed him when he left that fateful morning.  He told me briefly that he got to Ground Zero just after the second Tower fell and he had spent a good amount of time thereafter on “The Pile”.  He slept in the Church and was ready to head back out but said he would be home the next day but then go back.  We he came home I kissed him and we cried together.
In the following months, hubby was assigned to morgue duty.  I know….the things he saw was not something I would wish on anyone to see, but he helped do something that would help loved ones “know”.  All I can say is that I could not buy black garbage bags for a few years afterwards.   My husband was assigned down at Ground Zero until May of 2002.
**Update – The one thing I forgot to add was the fact that while at work and freaking you could see the smoke from the Towers in Manhattan from my office in Garden City.  That is about 45 minutes away by train.  My cousins in Brooklyn went on their roof and found papers from the Towers.  Sad.
Today, he goes for health screening.  He goes every six months and I thank God everyday that, so far, he is doing good.  I feel fortunate that he is healthy and is doing Biathlons, Triathlons (he is a half Ironman) and Marathons.  I am so proud of him. Too many of his friends or acquaintances either perished in 9/11 or are currently sick.  He doesn’t like to talk too much about that day and takes off of work every 9/11 and either goes running or biking….in fact that is where he is now.

In memory of all the men and women who died that day and because of that day, do something nice for someone.  Go see that old neighbor down the street and have coffee with them.  Take a cake to a firehouse or precinct and let them know how much you appreciate them.
All gave some, some gave all.  Never forget. 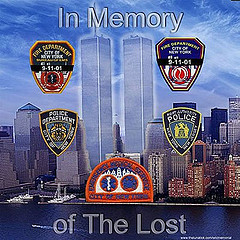 ~Karen
📂This entry was posted in Reviews