The Angel Series by Liz Borino

SiKReviews Comment
I was recently contacted by author Liz Borino to review her latest books that are due out soon.  The blurbs had me accepting the review.  Please note, this was a solicited review and although my reviews are almost always positive, I have no issues in telling the negative in any story.  The books were provided to me by the author.
Angel’s Hero by Liz Borino will be released on 02/26/2014.  This is a m/m military Romance/Romantic Suspense book.

“CIA Agent Aaron “Angel” Collins doesn’t take many things on faith. He trusts his gut, his eyes, and his husband, Jordan, an Army Captain. When his commanding officers deliver news of Jordan’s death, Aaron needs proof. The facts don’t add up, and Aaron must decide if he can trust Major General Troy Hart to assist in his quest to discover the truth.
Captain Jordan Collins is battered and disheartened in an Afghanistan prison, but definitely not dead, though he learns his own government believes he is. His only mission now is to stay alive and make it home to Angel, if he can find an ally among the enemy. But someone in the US government will stop at nothing to make sure he never leaves that prison, And Jordan must reevaluate the lines between friend and foe if he is ever to return to his Angel.”
I found this book a little difficult to read at times.  The constant back and forth in time was distracting.  I even started skipping the past events.  There are a few things that kept me from putting this book in the DNF column.  I understood what the author was trying to let us know what happened in the past.  How Aaron and Jordan met, why does Jordan feel the way he does about Troy?  I wouldn’t have minded these chapters or scenes been done as an prologue in chronological order.  I have nothing against flash backs in a book.  They can be very integral parts of a story line, but there were so many of them!   Obviously I did finish the book.  I did such for three reasons:  1.  This is a solicited review and therefore I am committed to read and review a full book; 2.  I liked the characters; and 3.  I loved the story line.  By the last few chapters, I was so emotionally invested in knowing how Jordan would get back to his Angel, I could not wait to read Book 2,  Angel’s Truth.
If you watch American Idol, you have heard Jlo say “in the beginning you were pitchy and nervous, but when you pushed through the nerves and found the pitch, you gave me goose bumps.”  Well I didn’t get goose bumps, but the sentiment was the same.  It took a while for the story line to solidify, but once it did, it was well worth it.
Angel’s Truth, Book 2 of this series, will be released on 03/12/2014.  As Liz indicates, “These Books Must Be Read In Order*! 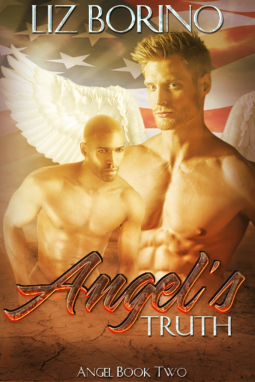 “Army Captain Jordan Collins arrives home, only to find the man responsible for his imprisonment, torture, and near-execution with his husband. Had his Angel moved on without him?
Aaron “Angel” Collins has driven his family and friends away in his quest to learn the truth of Jordan’s fate, leaving only Major General Troy Hart willing to help him. When Jordan miraculously returns, with a spirit more broken than his body, Aaron realizes Hart was really a liar with an agenda of his own. Aaron is unable to take time to heal his own emotional wounds, because he and Jordan learn Hart’s betrayal is even greater than they originally believed, threatening the entire nation. Now the reunited couple must race against time to keep a promise to Jordan’s savior and prevent Hart from bringing terrorism once again to American soil.”
This second book was a much better read.  It kept me engaged both emotionally and intellectually.   I couldn’t put it down.  Even know I knew where the book was going and had the who done it part of it figured out, I was curious to see how it all played out.  I really liked it.  I can’t say much about the book without some major spoiler alerts so I will just say I loved this story.  From Book 1 to Book 2, the story line was great.  I could see it as a movie plot.
I read both books in one day (thank my boss for taking a vacation this week).  Although reading got to a shaky start, it was never because I wasn’t interested or bored.  It could just be one of my quirks.  But, Angel’s Hero and Angel’s Truth are worth reading.  I give The Angel Series a collective:

Thank you Liz for letting me have the opportunity to read your books.  You can find Liz on Facebook.

« One Night Ride by Jennah Scott Facebook and Other Stuff »