SiKReviews 1 Comment
I know I have been waiting a long time for this particular book to be written.  I enjoyed the the first book in this series, Avoiding Hell’s Gate a lot.  I know many of Flynn Eire’s readers begged her for more of these Hounds of Hell.  Now, without further ado, I give you Switching Teams, Book 2 of the Hounds of Hell Series by Flynn Eire! 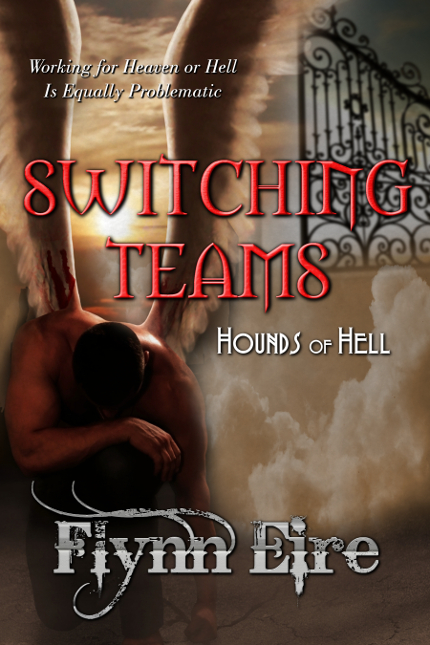 Promoted from keeping an eye on the planet to saving souls, Castillo has to uphold the agreement between Heaven and Hell, protecting the balance between good and evil. Tasked by Gabriel, he must now track down the demon that used a loophole to steal innocent souls. There is one big wrench in the plan, well three. Castillo’s two Hellhound mates and one big dose of humanity. And as the first angel to ever mate, he’s on his own.
Hellhounds Jared Magnus and Rhyce Sethos aren’t sure how to handle their thousands of years’ old virgin angel mate, let alone track a demon and save the world.
Misconceptions and hurt feelings early on in their relationship keep the three mates from connecting. All that aside, the three must work together to find a way to help the innocents in danger of ending up in Hell and starting a catastrophic chain reaction. Will they survive the obstacles in their way, still be able to handle a new job, and adjust to switching teams?

Like I said earlier, I have been hoping and praying that Flynn would continue the Hounds of Hell series.   And, I am so happy she did.  This book continues where book 1 ended.  Being promoted to Archangel to help fight to protect innocent souls, Castillo was gifted with not only his mates, but humanity.  A lot is thrown at him at once. Castillo finally acknowledges his mates and they go through poor communications and hurt feeling before they find their way together.
Flynn marries theology and creative license to truly make a story worthy of a Series.  Having Hellhounds switching sides is beyond brilliant!  They will help fight to keep the balance of good and evil.  But, what I really would like to know is:  Who will find their mate next?  How will their mating help the cause?  Will Ariel and the other Archangels find mates too?
Any book that has me begging for more is definitely something you need to read.  Switching Teams, is witty and intriguing that earns a definite 4 Hearts!

Love this book and series!