Shifters for Sale by Flynn Eire 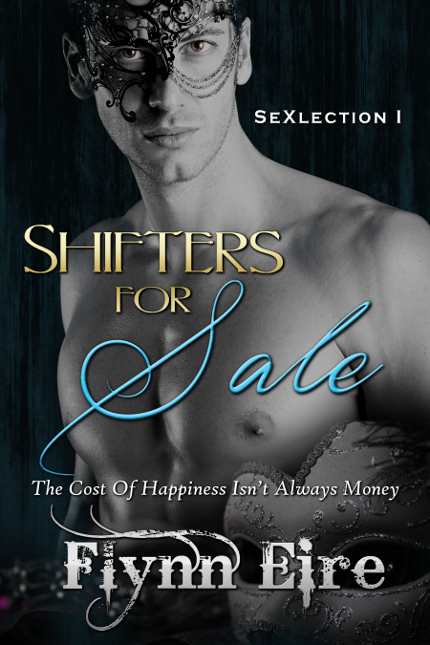 Born a slave, Joss grew up alone, uneducated, unloved, and dreading the day he turned eighteen and began servicing those who came to the brothel. It’s a horrible life for the cat shifters who have no rights and aren’t even seen as people. The only highlight is the massive parties the brothels throw once every few months to draw in potential buyers.
Joss is about to give up the dream of finding a permanent owner—the hope of every slave. But then the mystery man in the white mask buys him, turning his world upside down. While Joss should hate that, all he wants is to make Dencil happy and solve the man’s problems. Will the cost of Joss’s help be more than he can handle?

Can you imagine the world you know, turning on it’s ear, making you a sex slave?  Your freedom taken away and having to screw anyone that wants to screw you?  I felt so bad for Joss.  To be a sex slave is one thing, being raised to be one is a whole different ball of wax.  Thank the Gods above that Dencil found him.  After Dencil buys Joss, your heart starts to calm thinking Joss is finally going to get his Cinderella moment.  Then it shatters for him.  Joss is so brave and strong.  Not only surviving what he goes through, but then overcoming it enough to save his new family.  I cannot wait for the next SeXlection book is released!  Four Hearts!
I know I give many books four hearts.  What makes me give 5?  Tears of happiness or sadness and a deep emotional pull.  So just because I don’t give a book 5 Hearts, don’t think I didn’t love it.

Amazon (US)   |   AllRomance   |   Website
📂This entry was posted in Uncategorized

« Waiting on Wednesday! Being Sawyer Knight by Nicola Haken »