Seduced by the Game – A Hockey Romance Anthology

I would normally put my review at the end of a blog post, however, I thought I should do that first.  I first learned of this anthology through Facebook.  This anthology contains all hockey stories, two of which are from authors I have read in the past.  Needless to say,  I was excited to read Seduced by the Game and signed up to review it.
Please note, that all proceeds made from the sale of this book is to benefit Hockey Fights Cancer.  Cancer touches everyone at some point in their lives.  My sister, mom father and grandmother all had Cancer. So, another reason for me to review this Anthology is to help support people with Cancer and their families and to help find a cure for it.
Anthologies are both a blessing and a curse to me.  A blessing because I get to read new authors, and a curse because I wind up buying those authors’ entire library.  With six new authors introduced to me, my wallet will be begging me for mercy!
Each story in Seduced by the Game sucked me in.  Each author touched my heart with the story they told.  I fell in love with each of the  lead characters, and left me wanting more.  And best of all……it hockey!  I have to give Seduced by the Game 5 Hearts.

It’s time to drop the gloves and fight! Support the Fight against cancer that is.  This anthology of 8 brand new novellas is hot enough to melt the ice these players skate on. Featuring stories from popular New York Times & USA Today, Amazon, and Barnes & Noble bestselling authors, including Toni Aleo, Cassandra Carr, Cindy Carr, Jami Davenport, Catherine Gayle, Jaymee Jacobs, V.L. Locey, Bianca Sommerland, and Nikki Worrell.
New York Times and USA Today Bestselling Author – Toni Aleo TANGLED IN THE LACES
In Tangled in the Laces, Karson King is on the fast track to the pros and Lacey Martin is coming back from a hard fight against cancer and is terrified of him but their love is too much to ignore. Will Karson prove that he will protect her heart at all costs, or will he leave Lacey to pick up the pieces of her life once again?
Cassandra Carr and Cindy Carr HOOKING HANNAH
When Hannah attends an all-star game, she doesn’t expect a hockey player of all people to turn her world upside down. Her sister is married to a player and Hannah never wanted that life. But Scott could change everything. For Scott’s part, he has to know the woman who stirred his blood with just a look, and once he does, he realizes he wants Hannah to be his forever. Now to convince her…
Jami Davenport CRASHING THE BOARDS (Seattle Sockeyes 1.5)
Professional party crasher, Izzy Maxwell, needs the cooperation of reluctant party guest Cooper Black, the team captain of Seattle’s new hockey team, but Cooper can’t get past his anger over the team’s relocation to Seattle. Can Izzy melt Cooper’s frozen heart or will this party crash along with her fledgling business?
Catherine Gayle TAKING A SHOT (Portland Storm 2.5)
Katie Weber has had a crush on Jamie Babcock for almost two years, since he joined her father’s hockey team, the Portland Storm as an eighteen-year-old rookie. When cancer takes her health, her hair, and even her friends, she can’t bear to go to senior prom…until Jamie intervenes.
Jaymee Jacobs A VALUABLE TRADE
Bryan’s life gets turned upside down when he gets traded to the Dallas Comets, and things get even messier when he meets Georgiana, the Director of Team Services. He’s got a lot of work to do to prove his worth to his new team, but Georgiana’s sure he’ll prove to be a valuable trade.
V.L. Locey HEIR APPARENT
Superstar Cam Evans is fighting to climb out of a slump that`s growing worse with each day of living in denial. Fresh from the minors, Jacobi Neal is hungry for this chance to play back-up for the legendary goalie. Can two men battle each other, their inner demons, and the sizzling attraction building between them?
Bianca Sommerland BLIND PASS (The Dartmouth Cobras 0.5)
Nothing could stop Tim Rowe, the assistant coach of the Dartmouth Cobras, from falling in love with Madeline, but love alone can’t satisfy every need. Sometimes, to reach the goal, you have to take the chance with a . . . Blind Pass.
Nikki Worrell – CAPTAIN, MY CAPTAIN (Prequel to Scorpions Series)
Keith Lambert is the captain of the Flyers—until he’s not. To everyone’s shock, he’s traded to the San Diego Scorpions. As if that’s not bad enough, Phoebe, his girlfriend of two years, decides she doesn’t love him enough to follow.
All alone in a new town, Keith is drawn to Kelly, his take out delivery girl. When she shows up at ice girl tryouts, he’s lost. She’s all he can see. Can he convince her to forget her past and take a chance on him or is he destined to be alone in a new town a little bit longer? 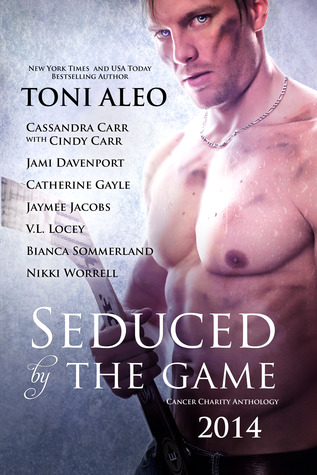 Crashing the Boards by Jami Davenport
Party crashing was an art—if done right.
Isabella Maxwell should know. She’d been crashing parties for years, at first to get a decent meal and later—much later—as a part-time profession with her three younger sisters. She’d never crashed a party she didn’t take from dud to memorable in minutes.
Tonight she might have met her match.
She’d done her research and knew the obstacles and challenges, but nothing prepared her for the scene awaiting her on the party deck of the Washington Queen, a local tour boat rented by the Seattle Sockeyes hockey team for an evening dinner cruise around Elliott Bay.
As security checked invitations at the door, Izzy snuck past them and peeked in the doorway, scoping out the scene inside—DJ in the corner, empty dance floor complete with mirror ball and flashing lights, not a dancer anywhere. Hockey players were slouched in chairs clumped around tables, reminding her of pimply faced preteens at a junior high dance. Only these boys weren’t preteens or pimply faced. They were a formidable wall of broad chests, muscular thighs, and determined expressions. Each one mirroring the other, but she’d done her research. There was one man she needed to win over to salvage this party, and he hadn’t arrived yet.
Her sisters had already boarded the boat, managing to sneak past security, every one of them dressed to kill or at least to charm a professional hockey team, Bethany in her plunging Vera Wang gown and deadly high heels. Emma and Avery, the youngest at twenty-one and identical twins, looked every bit like giddy hockey groupies who’d managed to snag an invite to the party. Standing near the buffet table, they giggled and whispered as they stole glances at the players. Several players stared right back. Nearby, Bethany engaged the team play-by-play announcer in conversation, while he stared at her boobs, but men always stared at Bethany’s boobs.
The stage was set.
Time to get this party started. The Sockeyes were going to have the time of their lives if she had to threaten bodily harm with their own hockey sticks.
“Ma’am, I need to see your invitation.” A security guard with a receding hairline, the waist of his polyester pants pulled up to his armpits, and a determined set to his skinny jaw, stepped in front of her before she could enter through the double doors.
“Oh, that.” Izzy made a show of digging through her saddlebag of a purse, not exactly in keeping with her little black sheath, but it served its purpose. “I know it’s in here somewhere.”
The security guard wasn’t the least bit impressed. He tapped his toe on the floor and took a ready stance as if he expected her to run any moment. Just what she needed, a SWAT team wannabe. She batted her eyes at him and continued to dig in her purse.
“I’m sorry. I know it’s here somewhere.”
“Ma’am, you’ll need to leave the boat until you can find it.”
She laughed and rubbed one perfectly manicured finger across his name tag. “Now, Carl, you just hold on one teensy bit. We’ll get this straightened out.” Izzy slipped into her fake Southern drawl; it brought most men to their knees.
Not Carl. In fact, not one hair quivered on his mustache. “My orders are strict. No one, not even the governor, gets in without an invite.” He wrapped scrawny fingers around her arm and pulled her none too gently from the doorway. He might look like a wimp but the guy was surprisingly strong.
No matter. She’d switch to Plan B.
“My boyfriend will be here any moment. He must have the tickets.”
As if on cue, her target for the night walked up the ramp and onto the boat. Cooper Black. The captain of the newly christened Seattle Sockeyes, and the most outspoken man on the team especially when it came to the team’s move and current situation, which he hated—the very man Izzy needed to tame tonight for this situation to turn around.
Judging by the stubborn set of his jaw and those steely blue eyes, this wasn’t going to be easy.