Last month, I attended the Indies Invade Philly Convention.  There, I met some of my favorite authors and I also met some new authors.  One of those latter authors was Melissa Collins.  Later that week I decided to give her book, Let Love In a try.  (Long Island Girls need to stick together.)  Needless to say, I binge read the rest of the series.   I haven’t written about this series yet, because I was waiting for the fifth book in the series to come out.  Now that it has……
The Love Series by Melissa Collins is a wonderful collection of love stories surrounding a group of family and friends.  You will laugh but you will definitely cry, so keep your tissues handy.
Let Love Live is the fifth book in the Love Series.  Here is the blurb: 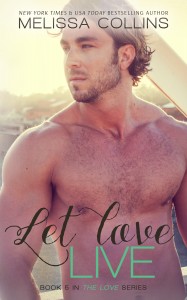 Who would you become if you lost the only person who ever mattered?
For twenty-six year old Dylan Hopkins, the answer is easy. He’s become no one.  Memories of the happier times are all he has left as he finds himself meandering numbly through his now dull life. Though he cares about his work and family dearly, he’s yet to let himself find love again. Afraid of letting go of what he once had, Dylan chooses to keep his heart buried, where it belongs, having died a long time ago.
Conner Michelson is about to change everything Dylan knows. He’s every bit the bad boy persona – tatted up, ex-MMA fighter, but after an injury leaves him unable to fight, he has to rethink his goals. Having just opened his own gym, Conner can cross his first major life accomplishment off his very short list. Next up: find a man he can settle down with and build a family. Seems simple enough – a dream most people have, but when he meets Dylan, his carefree, easy-going life is thrown into a tailspin.
Determined to keep Dylan in his life, Conner vows to resurrect Dylan’s long ago buried heart and let love live once more.

Like I said before, I have been waiting for this book to come out before I said anything about this series.  But it is more than that.  I have been waiting for Dylan’s story since the first time he was mentioned and that it was clear he was going to be a recurring character.
Devastated by the suicide of his first lover, Dylan has been afraid to turn himself fully over to the possibility of love for the fear of being left again.  You can feel how lonely he has been from the beginning.  I longed for Dylan to have his happily ever after.
Conner is big, strong and sooooo handsome.  As soon as Dylan entered his gym, he is interested.  I just knew, once the truth came out, and they opened up to each other sparks would fly.
And fly they did.  As their story progresses, you can feel how natural it is.  They were meant to be together.
This might be Melissa’s first venture in the m/m genre, but I think she did an incredible job with this story.  I read many m/m books, and I hope Melissa will do another one day.
Not only do I give Let Love Live 5 Hearts, but I give the entire series 5 Hearts.  I hope that there will be more installments.

Melissa Collins has always been a book worm. Studying Literature in college ensured that her nose was always stuck in a book. She followed her passion for reading to the most logical career choice: English teacher. Her hope was to share her passion for reading and the escapism of books to her students. Having spent more than a decade in front of a classroom, she can easily say that it’s been a dream.
Her passion for writing didn’t start until more recently. When she was home on maternity leave in early 2012, she read her first romance novel and her head filled with the passion, angst and laughter of the characters who she read about it. It wasn’t long before characters of her own took shape in her mind. Their lives took over Melissa’s brain and The Love Series was born.