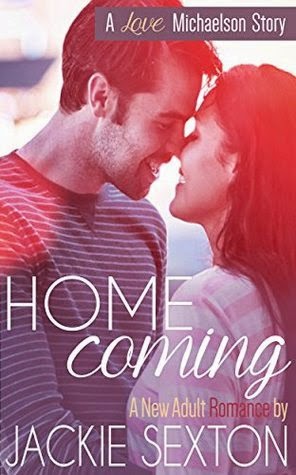 What he wouldn’t give to know her. To tell her that her art saves him everyday.

Ariane Michaelson is always the quiet girl in the room, the one that her kooky mother and three sisters lovingly call the wallflower. After graduating from college she finds it more than a little difficult to find the graphic design job of her dream…or any job, really. She’s more than given up on painting, and a terrible run-in with her twin sister’s fiancé makes each day harder to keep a life altering secret.

Liam Ashdown was just the moody small town nobody, with one friend and a busted pickup—until he moved to LA. Spotted by famous actor and producer Michael Jennings during a late night shift at the bar, Liam is transformed seemingly overnight into Tinsel Town’s hottest bad boy. The life Liam once knew is turned upside down with models and mayhem…and there isn’t much down time in-between.
The only thing that keeps him sane is the paintings. Beautiful ocean portraits that remind him of home, painted years ago by some friend of a friend.
What he wouldn’t give to know her. To tell her that her art saves him everyday.
The engagement of his childhood friend, Todd, brings him back home to Craryville, to deal with a drug-addicted mother and an ailing grandmother. But it also brings him hope—somewhere in the bridal party is the woman who has been his calm and respite in the storm of fame.
The only question is, can she save him? 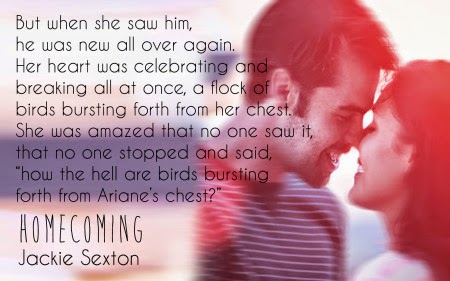 This is a Cinderella story of sorts.  Although I think the author could have added more to this story, it was an easy enjoyable read.
I could really relate to Ariane.  I often found myself thinking what she was.  I wish she would have opened up her mouth just a little at the end, had it out with Liam.
Liam is one of my fantasy men.  Bad boy turned into actor but yearns for the simple life he knew he wanted.  For a man who thinks he knows the woman, he was quite clueless about her feelings.  I know most men are, but she is a wallflower.  She doesn’t want to go to premiers and clubs like that.
I give this book 3.5 Stars. 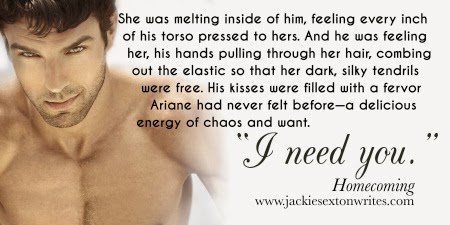 A new project by Jackie Sexton!

Want more sizzle in your life? A story to get your blood pumping and your heart racing? A romance with a little more steam?
eSizzle is here to help. We update our blog and our social media platforms with only the hottest, cheapest books out there. Whether you’re looking for a quickie, or a long, drawn-out affair, we’ll match you up with an eBook that’s sure to keep you warm at night.
FREE eBook!
eSizzle’s newsletter gives you a rundown of amazing daily deals, giveaways, and freebies–extra stuff that you won’t see on our social media. Give it a try–if you don’t like it, you can always unsubscribe. Subscribe today and receive a free copy of “Too Much to Bear” by Jackie Sexton in your inbox! Newsletter

She is an avid reader and writer of steamy, paranormal romance. She loves dreaming up new worlds about brave (and slightly neurotic) heroines, and hunky, lovable heroes. She also loves dark chocolate and Chihuahua pups like nobody’s business! 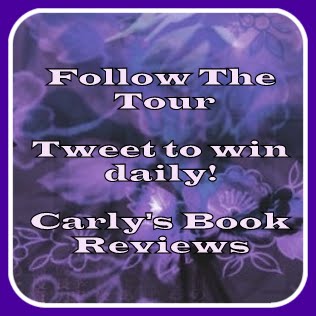 Ariane was happy to be in her old room, surrounded by all of her and Isabella’s old things. It was all the stuff they had convinced themselves that they were too grown for: the stuffed animals, collages made from celebrity magazines, secrets stashes of bubblegum. But it comforted Ariane to sit perched on the edge of her old bed, the quilt Nana Love had made for her as a child beneath her as she painted for the first time in months. It made her feel weird and out of place to paint in LA, so she hardly even tried. It just wasn’t a part of her life there—it was foreign, mystic, something reserved for the old her, the part of her that grew up in Craryville and believed in hope and magic. When she came back, however, she could feel it again. Creeping through her skin and taking hold in her veins, promising and bright like the colors across her canvas. She loved the constraints of the canvas, the deceptive limits that reminded her that every scene, person, creature, that everything was boundless. That’s what she aimed for in her paintings. A scene so intricate and and illusive, ever-lasting and filled with depth. She was certain she had yet to succeed, but it was this impossible dream that kept her hopeful, yearning. It was the beauty of painting with oil paints—they were so thick, and mixed so beautifully. It was chaotic, and you had to know what you were doing, but once you got it right, it was simply magic. There was a knock on the door that jolted her, causing the brush to slip and smudged yolk yellow into her pink cloud gracelessly. “Um…who is it?” she called, slightly frazzled as she turned her attention to the door. It creaked open and Jordan popped her head in, smiling sheepishly. “Hey you, painting again?” Ariane blushed, looking back to the yellow blemish with dismay. “Um, sort of.” Her older sister came up behind her and appraised the painting. “It’s gorgeous,” she murmured, scanning it and shaking her head, as if in disbelief. “It’s okay,” Ariane shrugged, cleaning off the tip of her brush with turpentine self-consciously. She would have to try and fix up the mistake later, if she had a moment she could steal to herself. “It’s not like I paint anything but beaches anyway.” “But that’s what’s so incredible,” Jordan gushed on, taking her sister’s hand comfortingly. “You can paint the same thing over and over again, in so many different ways. It’s just…so inspiring. I wish I had half the talent you do.” Ariane could see the earnestness in Jordan’s hazel eyes, and she wanted nothing more than to bury her face into a pillow in embarrassment. “Thanks,” she murmured, looking away to her feet. She knew her sister meant well, but she always felt strange about her talent, like it was something useless that distracted her from getting a job or being a “real” adult. How was she supposed to take care of her mother with paintings when she got old? “And don’t you dare shove this one in the closet like the other ones.” Ariane’s eyes shot up, and Jordan gave her a stern look, her lower lip jutting out in defiance. “How…how did you know that’s what I do with them?” “Duh, you think I’ve spent all this time at mom’s house without snooping?” Ariane shrugged and smiled. “I guess I should have hid them better.” “No!” Jordan pushed Ariane’s shoulder lightly, still scowling at her. “You have to show your paintings to the world, Ariane!” “I’m just the wallflower,” she reminded her sister as she folded her hands up in her lap. That was something Jordan couldn’t deny; Ariane had always been the quiet one, reliable, but about as noticeable as a worn rug in the basement. It was why everyone in the family called her wallflower—“where’s wallflower?” they’d tease if she had gone particularly quiet. “A really, really beautiful wallflower,” Jordan pointed out, tugging at a lock of Ariane’s hair. “What’s with all of the compliments all of a sudden?” Ariane asked, wrinkling her nose suspiciously. She and Jordan had always gotten along, like she did with all of her sisters, but she wasn’t used to her being so sentimental. Jordan was the jock, the rough and tumble tomboy who was more likely to tease you with a noogie than give you a hug. But ever since she had gotten engaged to Todd, she had become especially sappy. “I just love you, Ariane, and I heard about your break-up.” “Oh.” Ariane’s heart sunk like a stone in a pond. “Don’t worry about that, really. I’m fine.” She said it even though her stomach began to flip uncomfortably. But she knew it wasn’t just Drew, she didn’t want him back. With all of the distance, she could see now how he wasn’t good for her at all. No, she was upset because it made her feel so dumb, so naive for having fell so hard for him, and for believing that she could find someone who would want to be with her forever. Jordan pulled her arm around her sister’s shoulders. “Some boys don’t know what they’re missing out on.” She said it gently, in a sweet, soothing voice that touched Ariane. She knew she was so lucky to have so many sisters, so many people to believe in her and tell her they loved her. “Thanks, Jordan,” she said softly.
📂This entry was posted in Uncategorized

Thanks for hosting! I love all the purple on your blog. 😀