SiKReviews Comment
col·lab·o·rate  [kuh-lab-uh-reyt]
verb (used without object), collaborated, collaborat·ing.
1.  to work, one with another; cooperate, as on a literary work
col·lab·o·ra·tion  [kuh-lab-uh-rey-shuhn]
noun
1.  the act or process of collaborating.
2.  a product resulting from collaboration
I know what you are say….Karen wtf is with the vocabulary lesson?  Relax there won’t be a test.  Not too long ago I talked about anthologies and how I love reading them so that I could find new authors that I might like.
The other kind of books that I love is collaborations.  There are a few of the author I read that collaborate often.  Two of my favorite authors collaborate quite often, and of course, I love reading everything they do. Whenever Stormy Glenn and Lynn Hagen and write a book, it feels like Christmas Day!
As a spin-off of their series Lady Blue Crew, Stormy and Lynn give us Elite Force.  Here is the blurbs for both the first and second books of Elite Force.
Second Chances (Elite Force 1) 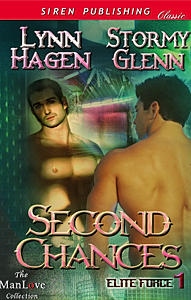 “Make sure he is well taken care of” would be words Lieutenant Ryan Devries would live to regret. He was shocked to see Kurt Ackerman’s name among the harden criminals he was assigned to bring in for questioning, especially since he knew the man intimately.
Tracking Kurt down and bringing him in was the easy part. Forgetting the look of betrayal on his former lover’s face was hard as hell, especially when Ryan’s message for Kurt to be taken care of was used against him by a sadistic officer out to torture Kurt into confessing everything he knows—which isn’t much.
Kurt Ackerman was running for his life. When Ryan, the man that left him after one night of bliss, apprehends him and takes him in for questioning, Kurt never expects to survive, let alone see the man again. But when the unit Ryan is working with is ordered to return Kurt to his home planet, the furthest thing on his mind is hooking up with the sexy man again. But forgetting Ryan may be the hardest thing Kurt has ever tried to do, especially when Ryan won’t take no for an answer.
Chasing down the men on their most wanted list, Ryan soon discovers that not only is winning back Kurt’s trust an almost impossible mission, but so is the task of stopping the Onyx from hurling past End of the Line and into the unknown.”
Rings of Sapphire (Elite Force 2)

“August Ryker is a man intent on completing his assigned mission and being left the hell alone. Thrown into close quarters onboard the Onyx makes him a very grouchy communications specialist. Crash landing on an abandoned space station just might be at the top of his list of crappy days, but finding a man who belongs to the venomous Andronian race hiding in the air duct might be more than the Sayak can handle—especially when he can’t seem to keep his hands off the guy.
Not measuring up in the eyes of his own race, Sapphire isn’t surprised when his uncle abandons him in on outpost in the middle of nowhere. Not knowing if he is going to ever be rescued, he’s overjoyed when a spacecraft crash lands on the planet. Who cares if the man that finds him is an Elite Force soldier…and armed…and so damn hot that he takes Sapphire’s breath away? He’s being rescued.
Isn’t he? Can Sapphire convince August to take him along when the unit leaves or will he be left behind forever?”
Since Rings of Sapphire just released, I will review that. August Ryker is that gruff warrior type that rings my bell.  When men like him fall, they fall hard.  And who wouldn’t fall for Sapphire.  I truly felt for him when we find out why he was at the space station.  I was pissed off at the same time my heart broke for him.  When August finally realizes that Sapphire is his mate, I melted.  ❤❤❤❤❤
I can’t wait for the next book in this series (which according to Stormy’s website will be Cheyenne’s story).
All I know is whatever Stormy Glenn and Lynn Hagen write is pure gold! Not only am I recommending you buy this series, I encourage you to obtain the Lady Blue Crew Series as well.  Where one Series ends, another begins.  Well done ladies!
Ciao!
~*Karen*~
📂This entry was posted in Uncategorized

« My Everything by Jorja Kish Showing some Maya Banks love! »