Another Author to Watch!

SiKReviews Comment
My next author to watch is Caitlyn O’Leary.  Caitlyn is another Siren Author who I have had the pleasure of getting to know recently.  I was asked to review her book, and it was as wonderful as she is!  But I will get more into the story later.  Please let me introduce you to:
Caitlyn O’Leary!

Caitlyn O’Leary was born and raised in a small town in the Pacific Northwest. She’s been an avid reader all her life. Her earliest creative writing endeavors consisted of “ghost writing” exercises in which she pretended to be her younger brothers and sisters when she did their homework assignments, before they turned them in as their own. Years in corporate America honed her ability to manipulate words by day, while at night she continued to read everything she could get her hands on, including many, many steamy romances!
Now, happily married to her long, tall Texan and living in Southern California, Caitlyn has finally found the time to write erotic Happily Ever Afters for Siren. She enjoys swimming, travelling, writing, babysitting her nieces and nephews, spending time with friends and family and doing lots of “research” for her upcoming novels with her husband. 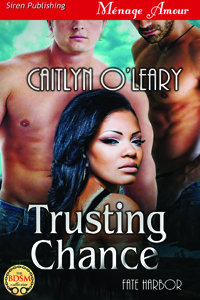 Josie Decker and Chance Reynolds knew each other years ago when they were in the same foster home, before Josie’s birth mother reclaimed her. Now, Chance and his best friend, Sam Booth an Afghan war veteran are living in Fate Harbor Washington, when Josie re-establishes ties with her foster parents and opens a bakery in the quaint town. Chance realizes that growing up with her birth mother has left Josie with physical and emotional scars and a deep belief that she is unworthy of love.
Fate Harbor is very accepting of triad alliances, and Chance believes that the relationship that will ultimately heal Josie is one that includes both he and Sam. Sam’s recent trauma, fighting for his country, has left him beyond hurt. Chance has despaired of saving the brother of his heart, but finding Josie again has given him hope, and a plan. Chance believes the three of them can make the perfect future together.

After growing up way too soon and raising your sisters, what do you do with your life? Chance, who has never forgotten about Josie, knows exactly what she should do, and he will help her do it. Sam always knew that Chance would be there for him whenever he needed him. After being injured in the war, Chance proves that Sam was right. When Sam meets Josie, it just proved you just always trust Chance. Right from the beginning, Chase, Sam and Josie’s relationship was as seductive as Josie’s Cinnamon Rolls! I totally give this 4 Hearts!
I cannot wait for the next installment of Fate Habor which will be published on May 15, 2014, Protecting Olivia!